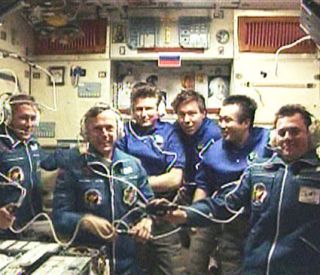 The newcrewmembers docked their Russian-built Soyuz TMA-15 spacecraft at the stationat about 8:34 a.m. EDT (1234 GMT) as they flew 220 miles (354 km) above thesouth coast of China. The orbital arrival brought the station to its full,six-person crew size for the first time in history and includes a spaceflyerfrom each of the $100billion station?s major partner agencies.

?It?s anhistoric day, and it?s also a very happy day,? said Thirsk, Canada?s firstlong-duration astronaut, after arriving aboard. ?You can?t imagine the state ofelation the six of us have right now.?

As the two three-man crews merged into one, they greeted one another with wide smiles and warm hugs. The spaceflyers waved excitedly to flight controllers on Earth via a video link and Romanenko pumped his fist victoriously in the air several times.

Together,the six spaceflyers make up the station?s Expedition 20 and they are the mostinternational mix ever sent to the outpost. They represent the spaceagencies of Russia, the United States, Canada and Japan, as well as 11 countries of theEuropean Space Agency.

?I thinkit?s a great way to kick off six-person crews,? NASA?s deputy station programmanager Kirk Shireman said Thursday. ?We?ve been waiting for this for a longtime.?

The SoyuzTMA-15 blasted off from Kazakhstan on Wednesday to ferry the second wave of thestation?s Expedition 20 crew into orbit. Its arrival today capped years ofconstruction and intense work to prepare the station to support a full-sixperson crew, which would nearly triple the amount of science that can beperformed.

Padalka,Barratt and Wakata toasted the water recycling system?s operational status lastweek by drinkingwater recycled from their own sweat and urine. The system is vital for thestation?s ability to support six people in space since it cuts down the amountof water that must be shipped to the outpost, allowing for more cargo likefood, air and science equipment.

?It hasbeen 10 years in the making, this event,? Padalkasaid after the docking. ?Thisis very exciting and so we?re ready to start utilizing the station.?

Since thefirst station crew took charge, new modules from the U.S., Europe and Japanhave been added to the outpost. Earlier this year, astronauts added the lastpair of U.S. solar arrays at the station, which is now longer than an Americanfootball field and can be easily seen by the unaided eye from the ground.Inside, the station has a living space equivalent to a five-bedroom home or a 747jumbo jet, astronauts have said.

?I think itshows a great example to the rest of the world that if nations want to worktogether for something great, for something wonderful, something for the futureof our kids, that we can achieve some wonderful things, De Winne said beforelaunch. ?I hope we can continue this for many, many years to come.?

Friday?s Soyuzdocking kicks off a daunting mission that includes two visiting NASA shuttlesand 10 spacewalks, two of which will be performed by the station crew in earlyJune.

NASA plansto launch the shuttle Endeavour to the space station on June 13 to deliver thelast piece of the outpost?s massive Japanese Kibo laboratory. When the shuttlearrives, a record 13 people will live and work aboard the station for a shortwhile. A second shuttle mission in August will deliver new equipment andsupplies.

Japan alsoplans to launch its first-ever unmanned cargo ship to the station, the H-2Transfer Vehicle, during the flight.

Eachshuttle visit will swap out one member of the current six-man crew. Larger crewrotations will be performed aboard Soyuz spacecraft. Russia plans to launchfour Soyuz vehicles a year. NASA on Thursday announced a new contract with Russiathat will allow it to buy six Soyuz seats in 2012 and 2013 for about $306million, or about $51 million a seat.

In October,the crew will shift to Expedition 21 mission, with De Winne in charge, when therelief arrives for Padalka and Barratt - who have lived aboard the stationsince late March.