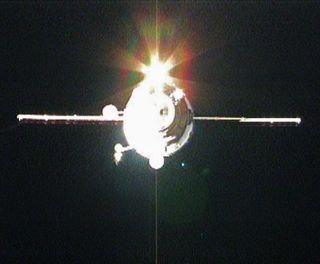 The Progress 33 cargo carrier approaches the International Space Station prior to docking on May 12, 2009.
(Image: © NASA)

The International SpaceStation has received a new load of supplies from the latest Russian-built cargofreighter, which successfully docked to the outpost at 3:24 p.m. EDT today.

The Progress M-02M ship attached itselfto the Earth-facing port on the Pirs docking module in orbital darkness whileflying 218 miles above the border between Mongolia and China. It's the 33rdsuch spacecraft sent to the station over the past decade.

The spacestation is occupied by the Expedition 19 crew of commander Gennady Padalkaand flight engineers Michael Barratt and Koichi Wakata.

"Everything is stable.The vehicle is moving steadily and stably, like a very important person,"Padalka told the ground as the Progress neared the linkup.

Padalka was standing by tomanually dock the Progress if the automated system experienced a problem.However, all went according to plan.

"We were justobservers for this operation," Padalka replied.

The "dry" cargotucked aboard the Progress amounts to 3,384 pounds in the form of spare parts,life support gear and equipment hardware.

The refueling modulecarries 1,918 pounds of propellant for transfer into the Russian segment of thecomplex to feed the station's maneuvering thrusters. And the vessel has 110pounds of oxygen and air.

The vessel was launched last Thursdayfrom the Baikonur Cosmodrome in Kazakhstan. It took a longer-than-usual trek tocatch up with the station, spending a few extra days in free-flight to test newavionics, according to NASA.