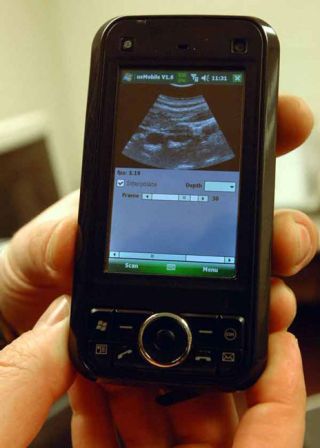 The image of a carotid artery appears on this small, portable smartphone connected to the probe by a USB driver.
(Image: © David Kilper/WUSTL)

A small handheld ultrasound probe used in conjunctionwith a Windows-based mobile phone may provide proof-of-concept for what amountsto a 'tricorder' like those seen in the 1960's era Star Trek televisionshow. Washington University computer engineers have tweaked every aspect ofultrasound probe design and operation — from power consumption and datatransfer rate to image formation algorithms.

The result is a smartphone-compatible USB ultrasoundprobe. This can be plugged into a standard Microsoft Windows mobile-basedsmartphone and the operator can immediately image the kidney, the liver, thebladder and the eyes using the screen on the smartphone.

It is also possible to use ultrasound endocavity probesfor prostate and uterine screenings and biopsies, and vascular probes forimaging veins and arteries for starting IVs and central lines.

"You can carry around a probe and cell phone andimage on the fly now," said William D. Richard, Ph.D., WUSTL associateprofessor of computer science and engineering. "Imagine having thesesmartphones in ambulances and emergency rooms. On a larger scale, this kind ofcell phone is a complete computer that runs Windows. It could become theessential computer of the Developing World, where trained medical personnel arescarce, but most of the population, as much as 90 percent, have access to acell phone tower."

According to David Zar, research associate in computerscience and engineering, gives one example of how the device might be used:

"The idea is that caregivers, who otherwise have totransport a young person, often wheelchair bound, to a hospital or clinic on aregular basis for examination, can be trained to do ultrasound to track musclecondition. The caregiver would only have to do a one-minute scan, transfer thedata captured to the clinic, and the results would come back to thecaregiver."

Handheld devices for doctors are no longer medicalscience fiction. Progress is rapidly being made in this area; physiciansalready have the LOCAD-PTSHandheld Microorganism Detector (tested aboard the International SpaceStation) and life sciences personnel have the NUGGET(Neutron/Gamma Ray Geologic Tomography) device for finding alien lifeforms.

(This Science Fiction in the News story used withpermission of Technovelgy.com)