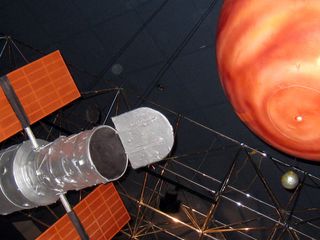 Acake, crafted to look like the orbitingobservatory by the bakers behind the Food Network reality show "Ace ofCakes,? was unveiled at the Goddard Space Flight Center during a party thatcelebrated humanity's achievements in space, as well as the Greenbelt, Md.-basedcenter's 50th anniversary.

"Ithought it would be really neat and it would enhance our Yuri's Night event ifwe had such a spectacular creation," explained Amy Pruett, a publicaffairs officer at Goddard who, as a personal fan of "Ace of Cakes"had the idea to arrange for the Hubble-themed dessert.

"Icalled Mary Alice," recalled Pruett, referring to Charm City's officemanager Mary Alice Yeskey. "She said that 'We've always wanted to workwith NASA, and we'd love to work with you guys,' so we set up a meeting."

"He isclearly a bit of a nerd himself, a little science nerd," offered Pruett."He loves NASA, so it just worked."

ThoughPruett had Hubble first in mind, she was open to other ideas given the scope ofthe space center's work.

"Ouremployees work on a lot of different NASA research satellites, whether it isbuilding it themselves or designing and building instruments to go on NASAsatellites," she said. "But Hubble, of course, everybody knowsHubble."

The nearlytwo-decade old space telescope, which is famous for both its imagery of theuniverse and its ability to be upgradedby astronauts, is managed and controlled from Goddard. The center iscurrently overseeing the preparations for the May 12 launch of the fifth andlast servicing mission scheduled before the space shuttle is retired in 2010.

"WhenI brought [Hubble] up to Chef Duff, he immediately ran with it," saidPruett.

"Thecake is a 2.5-foot Hubble, like a creative model of the Hubble Space Telescope,and then it is looking at a Jupiter model with its moons around it,"Pruett described before the unveiling Saturday night.

Appropriatefor its subject, the cake was suspended from the ceiling of Goddard's visitorcenter, where it will remain on exhibit above other Hubble-themed displays.

The cake'slong shelf life, or roof life as it may be, is a credit to its recipe.

"It's Styrofoam,"revealed Pruett, explaining they also had sheet cake to serve to the partygoers. The non-cake, or "dummy" cake, is not uncommon among "Aceof Cakes" orders, given the desire by customers to preserve the art.

"So,it is something everyone can enjoy rather than just those who attend Yuri'sNight," explained Pruett.

For thosewho couldn't make the party or get to Goddard, the Food Network filmed thecake's "launch" for a future episode of "Ace of Cakes".

A CharmCity representative was unavailable to comment as the network has a policy ofreserving details until after the episode has aired.

Customers,in this case NASA and the non-profit Space Generation Advisory Council, whichprovided the funding for the cake, spoke to collectSPACE.com to spreadthe word about Yuri's Night.

AlthoughGoddard's party was held April 4, Yuri's Night is an annual worldwidecelebration of the anniversary of the first human space flight on April 12,1961 by cosmonaut Yuri Gagarin. The day, which this year will be marked by over170 parties in 41 countries on six continents, is also the anniversary of thefirst space shuttle launch in 1981.

"Aceof Cakes" is not the first reality show to incorporate NASA. DiscoveryChannel's "American Chopper" focused on a Space Shuttle Tribute Bikein two episodes aired in 2005. "Mythbusters," also on the DiscoveryChannel, put the idea that NASA faked the moonlandings to shame in August 2008.

"It'sanother way for folks to hear about us," said Pruett. "So, people whoare into just art and cakes, and indeed reality shows, will hear about us andlearn in a way they might not have otherwise."

For moreinformation about Yuri's Night, see thiswebsite. For more photos of the Hubble Cake, see collectSPACE.com.