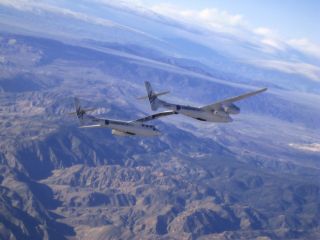 Virgin Galactic's mothership, WhiteKnightTwo, on a test flight from the Mojave Air and Spaceport in California.
(Image: © Robert Scherer)

COLORADOSPRINGS, Colo. — The space industry is facing enormous challenges because it isan extremely capital-intensive enterprise, and companies and governments aroundthe world are grappling with the greatest economic crisis in decades, accordingto participants in a panel discussion March 31 here at the National SpaceSymposium.

While many authorsand analysts compare the currenteconomic crisis with events of the 1920s and 1930s, those comparisons are"completely false and misleading," according to Alvin Toffler,futurist and author.  "This crisis is different."

The worldeconomy and everyday life are dramatically different than they were during theGreat Depression, Toffler said. Comparisons fail to take into account importantchanges that have occurred including increased globalization, greattechnological complexity and the speed of modern life, he said.

WhileToffler said he cannot predict what changes will occur, he does expect theworld's increasing reliance on space to play a role.

In spite ofthe economic crisis, the U.S. government as well as individual companies willhave to continue to invest in space-relatedresearch and development, panelists said.

"Thereis never enough money to do all the things that you want to do. So get overit," said Keith Hall, former director of the U.S. National ReconnaissanceOffice and a partner at the consulting firm Booz Allen Hamilton. "Figureout the most important things to accomplish and work within the resources thatyou have to get something done."

Privateinvestment will be critical to the development of new space programs andtechnologies in the coming years. In the past, government has been the driverof technology in both the civil and national security space sectors, Hall said."The next space age will produce revolutionary changes and innovation outof private sector capital," he added.

PatriciaGrace Smith, former associate administrator for commercial space transportationat the U.S. Federal Aviation Administration (FAA), added that the United Statesas a whole needs to "embrace the spirit of entrepreneurship, newtechnology and innovation. We need to encourage it, support it and let itgo. Who knows where the next breakthrough is going to come from. We need to bemore open to the next transformation."

One way tostretch limited resources is to avoid excessive regulation, said Smith, whocurrently is a consultant to Virgin Galactic, which is developing vehicles intendedto take paying customers to the edge of space. She said that while working inthe FAA, she was conscious of the fact that the fledglingsuborbital space tourism industry could not be regulated in the same waycommercial aviation is regulated because it would be too costly.

"Welaid the groundwork for a separate certification process that would allow theindustry to thrive," she said.

On theother hand, a regulatory regime that is too laissez faire creates too muchuncertainty, said Rachel Yates, a partner with the law firm Holland and Hart,LLP. Carefully crafted regulations help investors to understand their risksbetter, may make insurance more available and help the U.S. government complywith international obligations, she said.