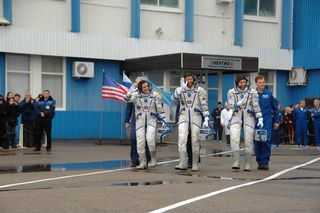 A Russian spacecraft carrying a space tourist, a rookie astronautand a veteran cosmonaut docked at the International Space Station Saturdayafter a two-day chase.

Shortly before docking, automated systems aboard the Soyuzindicated that a thruster was malfunctioning and driving the vehicle away fromthe space station. Russian mission controllers decided to switch off automaticsteering, and told Padalka, the Soyuz commander, to manually guide the shipinto port to close the last 150 meters (500 feet).

"We controlled the situation all the way through,"A Russian space official said in a briefing after docking. "Of course wewill investigate it and we will correct the algorithms of the flight."

The docking went smoothly otherwise, with the craft pullingin to harbor about 9 minutes ahead of schedule.

"Well, just the way you taught us," he replied.

The hatches between the two vehicles were opened at 12:36p.m. EDT (1636 GMT), slightly behind schedule to allow the station crew tofinish up a time-sensitive experiment on the Japanese Kibo laboratory.

The spaceflyers were greeted with hugs and hellos from thestation's Expedition 18 crew, and calls from Russian and American officials aswell as the spaceflyers' families.

"Don't break anything," one of Barrat's childrentold him. "I'll try not to," Barratt replied. "We're having alot of fun, and the food's not bad either."

"I thought it was rather short," Simonyi told SPACE.comrecently. "Certainly there were many things that I wanted to do that Ihaven?t done. Continuing to work there and continuing to support the work ofprivate spaceflight, I think it's worth it."

Veteran cosmonaut Padalka is in charge of the spacestation?s Expedition19 crew, and is the first person to command a station mission twice.Barratt, a first-timespaceflyer, will serve as Expedition 19 flight engineer.

"Looking at the Earth, looking at our home planet fromspace - I will certainly be at the end of a line of hundreds of people who havedone that before me, but I can't imagine anything that?s going to affect memore than just seeing that from that perch," Barratt told SPACE.combefore launch.

There are three people currently onboard the space stationeagerly awaiting the new arrivals. NASA astronaut Michael Fincke, commander ofthe station's Expedition 18 mission, is due to be relieved by Padalka. Barrattis set to replace cosmonaut Yury Lonchakov. Both Fincke and Lonchakov have beenon the station since last October and will return to Earth with Simonyi onApril 7.

The third person already at the station is JapaneseAerospace Exploration Agency astronaut Koichi Wakata, who will stay onboard tojoin the crew of Expedition 19. Wakata, a flight engineer, is his nation's firstlong-duration astronaut.

"You know that all these countries have beenparticipating in ISS project for 10 years as a minimum, and now it?s prettyhigh time to have all these astronauts and cosmonauts together working inspace," Padalka said in a preflight interview.

Later, Simonyi will move his custom-made seat liner into theSoyuz returning Fincke and Lonchakov, who are returning to Earth after morethan five months in space.

On April 2, command of the orbiting laboratory willofficially pass over from Fincke to Padalka during a change of commandceremony.

The new Expedition 19 crew has their work cut out for thempreparing the orbiting laboratory to receive double-sized crews of six startingthis summer.

"Imagine that you?ve invited a lot of people to yourhouse and that some of those houseguests are coming to stay; so you?re going tospend a lot of time cleaning closets and making sure your kitchen isready," Barratt said in a preflight interview.

The crew plans two or three spacewalks to lay the ground forthe arrival of the Mini Research Module 2, a node similar to the Pirs dockingcompartment currently in orbit, due to launch on a Russian Soyuz spacecraft inAugust.