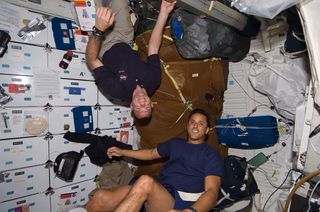 Astronauts aboardthe space shuttle Discovery are due for some much-deserved time off Sunday asNASA engineers draw up new plans for the crew?s last spacewalk at theInternational Space Station.

Discovery?sseven-astronaut crew is scheduled to take about a half-day off to rest up from apacked spaceflight that has only become busier from daily changes to analready shortened mission plan.

?We?reready to start the day,? Discovery skipper Lee Archambault radioed MissionControl this morning. ?We know it?s a little bit of a lighter day, but I?m sureyou guys had a busy night overnight with a lot of planning.?

The crew?s latesthurdle is the upcoming spacewalk, a plannedMonday excursion to pay a service call on the space station and move gearinto position for the next construction flight.

Anincorrectly placed restraint pin thwarted efforts by astronauts to set up aspare parts platform ina Saturday spacewalk, leaving cargo carrier half-deployed and tied downwith tethers when they ran out of time to fix it and set up a second platform.Mission managers worked through the night to replan Monday?s spacewalk to wrap up theunfinished work and has divers in the water of its immense swimming pool usedfor spacewalk training to come up with the best repair plan.

Discoverylaunched toward the space station on March 15 and arrived last Tuesday to swapout one member of the orbiting lab?s crew and install the outpost?s finalset of U.S. solar arrays. The mission was delayed a month by technicalconcerns with the orbiter only to have its launch pushed back four days by agas leak.

The delayscut a day and a spacewalk from the shuttle crew?s already packed mission inorder to complete the construction before a Russian Soyuz ferrying carryingmore astronauts arrives later this week, so today?s scheduled half-day offshould come as a welcome relief.

At leastone Discovery astronaut may spend his free time floating down the space versionof memory lane.

?Who knows,maybe I?ll get to spend the night in the little cubby that I slept in while I wasthere if no one?s sleeping in it now,? Phillips said before flight. ?I want togo try some of that good Russian space food in the galley, and maybe I?ll runon their treadmill.?

Japaneseastronaut Koichi Wakata, who launched aboard Discovery to begin a three-monthmission at the station, is due to spend part of his day familiarizing himselfwith his new orbital home, NASA officials said. Wakata is the first astronautfrom Japan to live aboard the station long-term and is replacing NASAspaceflyer Sandra Magnus, who will return home aboard Discovery to complete herown four-month mission.

Some ofDiscovery?s astronauts will discuss their flight so far with reporters on Earthduring a series of television interviews.

Later today,the astronauts will conduct a full test of the station?s urine recycler, whichappears to be in good working order after two days of repairs. On Friday,astronauts replaced a brokendistillation assembly in the urine recycler, which spins like a centrifugeto begin filtering urine back into drinking water. A day later they turned iton while empty in a dry shakedown run.

?It soundedreally nice and quiet,? Magnus said after the replacement. The old distillationunit made loud vibrations when spinning until it broke down for good lastDecember.

Thestation?s urine processor is part of  a larger system designed to collectastronaut urine, sweat and condensation from the cabin atmosphere and filter itthrough a seven-step process back into pure drinking water.

Alibaruhosaid astronauts will fill the repaired urine processor with stored urine andthen begin the recycling process, which should take four or five hours. If thedevice continues to operate well, water samples from the overall system will betaken later in Discovery?s flight to be returned to Earth.

Discoveryhas passed the midpoint of its 13-day mission to the space station. The shuttleis slated to undock from the orbiting lab and land on March 28.