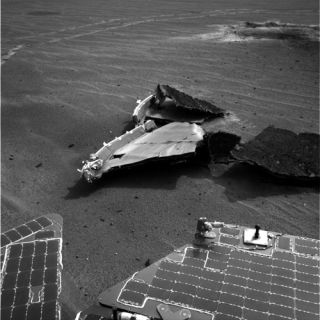 Mars junk in the form of entry hardware, scattered about at Meridiani Planum. Opportunity robot is inspecting the refuse for clues as to how entry gear withstood the plunge through martian atmosphere. Image
(Image: © NASA/JPL)

BOULDER, Colo. -- Like the adage here on Earth, so goes it for Mars: One person's junk is another's gold mine -- in this case, charred and busted up pieces of a heat shield.

NASA's Opportunity Mars rover is circling leftovers from its entry, descent and landing system that fell to the planet nearly a year ago. Both scientists and engineers are finding value in an up-close inspection of spent entry shield hardware that was shed at high altitude above Mars and fell with a thump onto the expanse of terrain that is Meridiani Planum.

The rover has been edging toward the damaged goods for several days. The Mars machinery is now in position to start detailed studies of the busted up hardware using its robotic arm.

"We have circled around to a secondary debris site we are calling the 'flank piece'", noted Christine Szalai, JPL's leader of the heat shield observations team. "These are some pieces that broke off of the main heat shield after impact," she told SPACE.com.

Szalai said that a set of "interesting targets" have been identified - targets to home in on with the rover's Microscopic Imager for carrying out fracture cross-section looks this weekend.

"This data will hopefully tell us the char depth through the thickness of the thermal protection system material. After we are done with this investigation, we are going to continue the spiral to survey the main heat shield and come in close to obtain more imaging data," Szalai explained.

Nobody could be happier about Opportunity's stroll through roughed up spacecraft hardware than Bill Willcockson. He led the Mars Exploration Rover entry systems work at Lockheed Martin Space Systems in nearby Denver.

"It's just amazing to see something that you crafted right here in your hometown sitting right there on the surface of Mars. It's just indescribable," Willcockson told SPACE.com.

The plan now scripted calls for Opportunity to wheel up to one of the large pieces of heat shield, then deploy the robot's arm-mounted Microscopic Imager. That device, he said, will carefully scan the shield's thermal protection system (TPS).

"We think we're seeing some good regions where the outer TPS is still visible to us. But we won't really know until we get right up on top of it," Willcockson said.

The rover is wheeling around to inspect two big pieces of entry shield. There is one larger segment that appears tent-like as it sits on Mars. The other big chunk of junk is dubbed the flank piece, Willcockson noted.

"The shield came down at something like 170 miles per hour, smacked into the ground going pretty much nose down. It made this big divot, rebounded and broke apart with the two pieces landing a few feet away into their final positions," Willcockson said.

The impact area is also the scene of bits and pieces of TPS, as well as other debris that includes springs that pushed the heat shield away from the other entry, descent and landing hardware. Once released, the 198-pound (90-kilogram) shield fell through the martian atmosphere some four miles (nearly 7 kilometers) before pounding Mars' surface.

Taking on the role of an artificial meteor, the heat shield struck the red planet and created a small impact crater that should yield clues to scientists about the soil properties of Mars, Willcockson added.

By taking an up-close look at the entry shield, Willcockson said, engineers are hoping to see the depth of the TPS char layer - just how well the entry shield took the high heating as it skyrocketed through the martian atmosphere.

"We think maybe two-tenths of an inch...but it could be more or less. This is the first chance to actually measure this [TPS charring] on the surface of another planet," Willcockson pointed out. Entry hardware is generally not instrumented, he said, "so you have no idea of how well it worked...you just know it worked or whether it didn't."

Data gleaned from surveying Opportunity's heat shield will be useful in designing and testing future entry shields, to gain a better understanding of how the TPS material responds in a "real world" environment and help grapple with the "unknown unknowns", Willcockson stated.

"You might learn some unanticipated things by looking at a piece of space hardware that's been sitting on Mars," Willcockson concluded. "So this is totally a once in a lifetime experience...once in a lifetime information."

Following its foray into the swath of discarded hardware, where next for Opportunity?

Steve Squyres, lead scientist for the Mars Exploration Rover program from Cornell University, said the robot has a very tough next assignment. The driving objective for Opportunity is etched terrain to the south of Endurance crater - a large impact feature in which the robot recently completed six months of rewarding science work.

"We don't currently know whether or not it will be possible to traverse a significant distance into the etched terrain. From orbit it appears to be pretty rugged stuff, so it may represent an impenetrable barrier to further southward exploration. We'll see when we get there," Squyres advised.

On the far side of that etched terrain is the huge Victoria crater. Chances of the rover reaching that geological paradise of a hole in the ground "are probably not good," Squyres said. "But if we did somehow manage to make it across the etched terrain, Victoria would be a very exciting next objective," he added.

Squyres said that next week, he will discuss "an interesting intermediate goal" -- something on the path from the heat shield to the etched terrain -- at a Mars Exploration Rover press briefing.