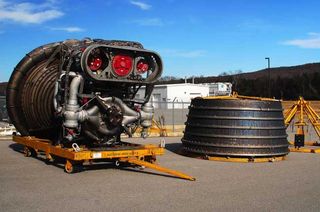 Lost and Found: The historical link between this engine and its planned Apollo 8 mission was lost until recently.
(Image: © NASA)

Fiveseconds before the first men left Earth for the Moon on Dec. 21, 1968, therocket they were riding ignited its first stage's five engines. They were thefirst astronauts to launch atop the Saturn V, and that day 40 years ago at 7:51a.m. EST was the first time those particular five F-1 engines had firedtogether.

For the Apollo8 crew of Frank Borman, James Lovell and Williams Anders, for the next 150seconds, those engines needed to work for their mission - to circle theMoon - to be possible.

And workthey did; despite having to burn 2.4 seconds longer than planned to make up foran underperformance, the five 19-foot tall, Rocketdyne-built F-1 engines - eachmore powerful than all three of today's space shuttle main engines combined -propelled Apollo 8 to 40 miles above the Earth. Their work done, the firststage was jettisoned and allowed to fall back and sink to the ocean floor some350 miles off the coast.

Borman,Lovell and Anders, with the help of their Saturn V's upper stages and Apollo 8command module would of course succeed, enteringlunar orbit on Christmas Eve in 1968, making history as the first to enterthe gravitational field of another celestial body. Their flight would be hailedas one of the boldest in all of human history.

The SaturnV rocket used to launch their adventure has long since vanished, having servedits purpose, although the third stage continues to travel unseen inheliocentric orbit about the Sun. All that remains of their journey is thecommand module, on display at the Museum of Science and Industry in Chicago,Illinois.

Thereexists however another component that was almost part of the Apollo 8 launchvehicle. Lost in plain sight for years, it was recently rediscovered just intime for Apollo8's 40th anniversary.

Normally -and for the remainder of the Apollo program - the engine configuration thatarrived at the cape would be the contingent that flew when launched. But thatwasn't to be for Apollo 8's first stage.

"Aproblem was discovered in one of the engines," Alan Lawrie, author of"Saturn" and most recently, "Saturn 1/1B", explainedto collectSPACE.com. A leak in a fuel pump seal was found in one ofthe outboard engines, requiring its replacement.

"Theengine was taken off the stage just seven months before eventual launch andreplaced by a spare engine," said Lawrie. "When Apollo 8 lifted offthe five F-1 engines had never been fired together before because of this latereplacement."

"However,the engine was never re-allocated to another stage," said Lawrie. "Instead,it was shipped to Michoud where it was used to verify the effects of long termstorage on F-1 engines. It remained at Michoud for over 20 years."

In 1990,the engine was inspected by Rocketdyne before it was moved to Alabama, movingbetween the Marshall Space Flight Center and U.S. Space and Rocket Center.

"Inthe intervening period, the historical link between this engine and its plannedmission was lost," Lawrie shared...