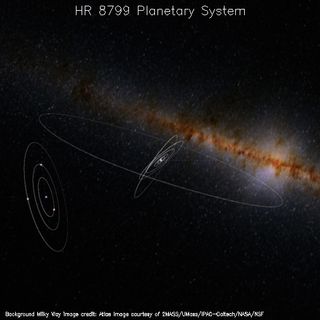 This 3D representation of the three planets orbiting the star HR 8799 shows the system is located 90 degrees away from the Milky Way galactic center, lower than the sun. (All orbital diameters are greatly exaggerated.)
(Image: © 2MASS/UMass/IPAC-Caltech/NASA/NSF)

Astronomershave continued to cast their eyes to the heavens, with bigger and bettertelescopes and as much passion as ever this year, but some of the coolestfindings of 2008 were right in our own backyard, or at least looked like theywere.

From worldsnearby like Mercury and Mars to those beyond our solar system, planetaryscience saw a boon. As for extrasolarplanets, astronomers bagged at least 50 newbies this year.

What'sresponsible for the surge of exoplanet detections?

"Thebig picture is that a wide variety of new technologies, both instruments onexisting telescopes and new dedicated telescopes, are really allowingastronomers to do much more sensitive measurements, and thus leading to a realbonanza of discoveries," Liu told SPACE.com.

And there'smore. Here are five favorite findings in astronomy for 2008:

With theextrasolar planet tally now well above 300, astronomers seem to be on track forspotting another Earth (the astronomical jackpot) before long. Along the waythis year, a jaw-droppingannouncement came in November when two teams of astronomers reported theyhad snapped direct images of exoplanets.

GeoffreyMarcy of the University of California, Berkeley, calls the images "themost spectacular thing in 2008."

"In myown professional opinion this is by far the most definitive picture of a planetever taken," Marcy said during a telephone interview, referring to thedirect image by the Hubble Space Telescope of the planet called Fomalhaut b.

The goldrush of exoplanet discoveries this year boils down to new techniques andobservatories as well as energetic astronomers involved, Marcy said.

Some otherhighlights include: the least-massive planet, weighing in at just three timesthe mass of Earth; the hottest planet, with temperatures reaching about 4,000degrees Fahrenheit (2,200 degrees Celsius); and three so-called super-Earthsorbiting a star.

Astronomerslike Marcy predict the upcoming year will bring us even closer to detectingEarth's twin. For instance, NASA's Kepler mission is scheduled to launch inMarch with the goal of finding rocky planets about the size of Earth that orbitwithin the habitable zone of their host stars where liquid water and life mightexist. Stay tuned.

The redplanet has gotten celebrity treatment this past year, with the touchdown ofNASA's Phoenix Mars Lander in May, the continuing presence of the MarsExploration Rover twins (Spirit and Opportunity) and NASA's Mars ReconnaissanceOrbiter (which has imaged nearly 40 percent of the planet).

A majorgoal of such missions has been to find signs of past or present liquid water,the main ingredient for life. That's why Phoenix snagged a star-studdedheadline when the lander collectedwater ice near Mars? north pole this year.

Earlier inthe year, Spirit found deposits of silica in Gusev Crater, suggesting,scientists said, that hot water once flowed through the Martian soil in hydrothermalvents. As on Earth, these hydrothermal vents may have once harbored life. Thediscovered silica could preserve fossils of such ancient life if it did indeedexist there.

And just infrom MRO ? evidence of carbonates on the Martian surface. Since carbonatescan't survive in acidic, harsh conditions, the mineral finding suggests any microbescrawling around when Mars was wet could've enjoyed a cushy existence.

Scientistswere hot on the trail this year of a mysterious "force" called darkenergy that has been expanding the universe at an increasing pace and was onlydiscovered about 10 years ago.

Though,admittedly, scientists say they are more than a few years away from solving thepuzzler of what dark energy is, a new method this year confirmed its existence,suggesting the force is stiflingthe growth of galaxies in the universe. Basically, in an expanding universedominated by dark energy, galaxies fly away from one another rather than mingleand merge.

Theseresults also suggest dark energy takes the form of what Einstein called thecosmological constant ? a term in Einstein's theory of general relativity thatrepresents the possibility of empty space having a density and pressure associated with it.

Black holesare so dense that nothing, not even light, can escape their gravitationalgrips. Though invisible, astronomers have inferred the presence of the darkbehemoths from their effects on nearby objects. And this year, it seems, allthe crazies came out of their cosmic closets.

And when itcomes to obesity, oneblack hole could've gobbled up 18 billion suns. This giant would dwarf thesmallest black hole found this year, weighing in at about 3.8 times the mass ofour sun and spanning just 15 miles (24 km) in diameter.

Researchersalso found this year that some supermassive black holes, which reside at thecenters of many or all galaxies, spew out giant bubbles from the tips of theirjets. (As material falls into the gravitational clutches of a black hole, theenergy can be spit out as jets of radiation and high-speed particles.) Thebubbles ultimately pop, spilling their gaseous guts. Turns out, the hot gaskeeps the black hole and its galaxy from ballooning to mega sizes.

More thanhalf of our solar system's smallest planet (Pluto once took this honor),Mercury, had remained a mystery until this year. On Jan. 14, NASA's MESSENGERprobe made its first flyby of Mercury, beginning a mission to image the entireplanet.

From theget-go, the probe sent back intriguing images, including clear evidence forvolcanoes. Images of the Caloris basin showed hints of lava flows and thepresence of a shield volcano larger than the state of Delaware, with gentlysloping sides.

And Mercuryis indeed shrinking as its iron-rich core slowly cools. Scientists hadspeculated this much from images taken during the Mariner 10 mission in 1974.But MESSENGER images showed more faults than did Mariner 10, suggesting thestrain from the planet's contraction was at least one-third greater than originallythought.

More tocome: The thousands of images and other data collected by MESSENGER could alsoshed light on otherMercury mysteries, including the planet's relatively giant core, whichmakes up about two-thirds of the planet's mass. One idea is that huge impactshundreds of millions of years ago might have stripped the innermost planet ofits original surface.