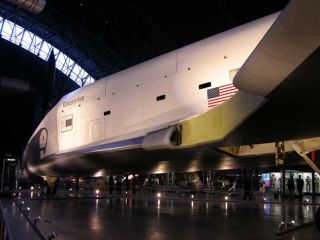 Move over Enterprise: the orbiter on display at the Smithsonian's Udvar-Hazy Center in Virginia may be replaced by another space shuttle.
(Image: © collectSPACE.com.)

Museums interested inexhibiting NASA's space shuttle orbiters after they're retired in 2010 may needto meet certain requirements set by the space agency on Wednesday, includingthe ability to underwrite upwards of $40 million in shipping and handlingcharges.

The prerequisites, which were outlined in a formal request for information postedon NASA's website, seek to insure that the orbiters are properly displayed,that they are used to "inspirethe American public and students in particular" and if possible do sowithout burdening NASA with having to pay for the vehicles' preparation andtransfer.

The fee per shuttle, which NASA estimates today will run $42 million (butcautions that the estimates are subject to change) are not for the vehicleitself, but the work needed before it is suitablefor exhibition.

"It is really not selling the orbiter, it is the preparation," saidNASA spokesman MichaelCurie in an interview with collectSPACE.com, explaining that $28.2million goes toward "safing" the orbiter, "which is primarily,removing all the hypergolic fuel systems and other environmental hazards fromthe shuttle," $8 million for making it ready for display and $5.8 millionfor ferrying it on NASA's modified Boeing 747 to an airport near the museum.

The projected price tag does not include the provision of an indoor,climate-controlled facility to house the shuttle, which NASA requires. Nor doesit come with the orbiter's three space shuttle main engines (SSMEs).

According to the request for information, "NASA plans to initially retainflight-worthy SSMEs for technical mitigation and potential programmatic reuse.The Space Shuttle Orbiters that would be available for donation after the endof the program would be offered without flight SSMEs."

NASA can fabricate engine bay covers or mock nozzles for an additional price,offers the document, or museums may choose to request non-flight-worthyunassembled or partially assembled engines, which are estimated to cost between$400,000 and $800,000 per unit, exclusive of the shipping costs.

Curie didn't immediately know why the orbiters and their engines were beingdonated separately, but speculated it might be to simplify the delivery of theshuttles.

Though NASAhas three orbiters - Discovery, Atlantis and Endeavour - only two will beavailable for donation. NASA plans to reserve the third for the Smithsonian'sNational Air and Space Museum, assuming they too can meet the same financialand facility requirements as the other museums.

Click here to continuereading at collectSPACE.com and learn which space shuttle orbiter NASA hasreserved for the Smithsonian.