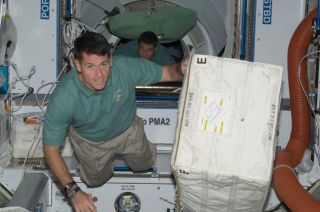 Astronautsaboard NASA?s space shuttle Endeavour packed up their room-sized cargo podWednesday and stowed it back in their orbital trunk as they prepare to leavethe International Space Station after Thanksgiving this week.

Shuttlecommander Chris Ferguson and his crew buttoned up their Leonardo cargo moduleand unhook it froman Earth-facing berth on the space station?s Harmony node so it can makethe trip home nestled in Endeavour?s payload bay.

?We?remaking the final close outs before we undock in just a few short days,?Ferguson said Tuesday in a televised interview.

Theastronauts delivered about 14,400 pounds (6,531 kg) of cargo, including a newrecycling system that converts astronaut urine and sweat backinto potable water for drinking, food preparation, bathing and oxygengeneration. After several days of glitches and a one-day extension to theirmission, the astronauts got the system up and running and took their finalrecycled water samples today.

Altogether,the spaceflyers are bringing home almost 2 gallons (7 liters) of fresh waterrecycled from astronaut urine and condensed sweat. Packed aboard Endeavour,meanwhile, are about 3,642 pounds (1,651 kg) of trash and unneeded equipment returningto Earth from the space station.

?We?rehaving a wonderful time,? Ferguson said. ?We docked with the space station afew days and since then, it?s been all work and no play.?

Endeavourastronauts arrived at the space station last week to swap out one member of theorbitinglaboratory?s crew and perform the mother of all space renovations toprepare the outpost for larger, six-person crews next year.

?Hey, wegot cold water!? station skipper Michael Fincke radioed down to Mission Controllate Tuesday, adding that he was looking forward to chilled drinks from thecooler once it was hooked up. ?And they said it couldn?t be done.?

UntilEndeavour arrived with the new space cooler, station astronauts had only thechoice between hot or lukewarm water for refreshment throughout the outpost?seight years of habitation.

Thestarboard side gear is one of two designed to rotate the station?s solar wingslike a paddlewheel to track the sun, but had been damaged for more than a year.

In additionto their packing work, Endeavour astronauts finalized plans for Thanksgivingaboard the space station on Thursday. Because Endeavour?s mission was extendeda day, all 10 astronauts of the joint shuttle-station crew will have time tocelebrate the U.S. holiday together before the orbiter leaves.

Pre-cookedturkey, stuffing, candied yams and a cranberry dessert were initially on themenu for Endeavour astronauts before they knew they?d have company for dinner.

?Sincethen, we?ve sort have been sort of collecting now that we?re going to be herewith the ISS crew,? said Endeavour mission specialist Steve Bowen. ?And now wehave enough food for everyone onboard, which is part of Thanksgiving anyway,sharing what you have.?

Endeavouris due to undock from the space station on Friday and land on Sunday afternoon.