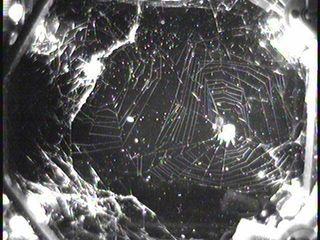 Two orb-weaving spiders sit in the middle of their respective, symmetrical webs aboard the International Space Station on Nov. 20, 2008.
(Image: © NASA/CU)

The orb-weaving spiders were transported to the station aboard NASA's shuttle Endeavour earlier this week, but initially wove an aimless concoction in their lab enclosure during their first days in weightlessness. But now they've taken another stab at weightless web construction.

"We noticed the spiders made a symmetrical web," the space station's current skipper Michael Fincke radioed to Mission Control today. "It looks beautiful."

Fincke said he was amazed at how fast the two eight-legged creatures appear to have adapted to living in space.

The spiders are part of an experiment aimed at sparking interest in science among students on Earth. The arachnids are the same kind of spider as "Charlotte" in the children's book "Charlotte's Web" by E.B. White.

Students on Earth will compare the webs of the space station's spiders with those of similar arachnids on Earth for the next few months. They'll also follow the lifecycle of painted lady butterfly larvae, which also are part of the experiment. The University of Colorado at Boulder is overseeing the experiment and provided an ample supply of fruit flies to feed the spiders, and nectar for the butterflies that will eventually emerge.

Along with the experiment, Endeavour astronauts are undertaking a major home renovation mission at the International Space Station. They delivered a second kitchen and bathroom, two new astronaut bedrooms, additional gym equipment, a space food fridge and a water recycling system that turns urine into drinking water.

Mission Control noticed the new spider web early Thursday and gave Fincke and his station crewmates a heads-up to look out for it.

On Friday, flight controllers on Earth said the space station spiders were their new source of space entertainment.

"I thought we were your main entertainment, but I guess we've been taken over by spiders," Fincke said.