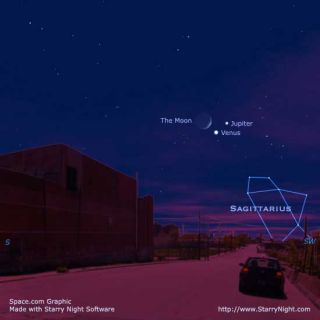 Look to the southwest after sunset on Dec. 1 for a close conjunction between three bright solar system objects: the Moon, Venus, and Jupiter. If you have binoculars, you might even be able to fit all three of them in the field of view. Between now and then, you can see Jupiter and Venus getting closer together each evening.

The most spectacular celestial sight during these final days of November is reserved for the early evening sky, as Jupiter and Venus, the two brightest planets, draw closer together.

The waxing crescent moon will join the planets on the first evening of December for a striking celestial trio.

One of my astronomy mentors, Dr. Kenneth L. Franklin (1923-2007), a former Chairman and Chief Astronomer at New York's Hayden Planetarium, often made reference to our "dynamic and ever-changing night sky."  Such an eloquent description certainly fits our current evening sky, as we now have a celestial summit meeting in the making in the western evening twilight.

For the remainder of November, evening skywatchers can watch as each evening Jupiter and Venus slowly converge on each other in the southwestern sky, right after sunset.  The two planets will appear a similar distance apart on both the evenings of Nov. 30 and Dec. 1. They will be so close you'll be able to stretch your arm out and, with your thumb, blot both of them out.

After Dec. 1, like two celestial ships passing in the night, the planets will slowly separate, but there will still be one more eye-catching sight to see.  For on that very same evening, those who gaze toward the south-southwest sky for up to about two hours after sunset arise will be treated to a spectacular sight as Venus, Jupiter and the crescent moon cluster closely together. The trio will form a wide isosceles triangle, with Venus at the vertex.

It should prove quite a spectacle for naked eye, binoculars, or camera.  Imagine the astrological significance that the ancients might have ascribed to a celestial summit meeting such as this!  Moreover, for much of Europe, the moon will actually appear to cross in front of Venus resulting in a rare occultation.

Writing of this spectacular celestial configuration in Guy Ottewell's 2008 Astronomical Calendar, Fred Schaaf calls the sight "stunning," adding that "they will draw all eyes their way."

The moment of closest approach for Venus and Jupiter will actually come during the early morning hours of Dec. 1, unfortunately when this "dynamic duo" is below the horizon for North America.  They'll be separated by just over 2-degrees, which correspond to roughly one-half the distance that separates Pollux from Castor, the "Twin Stars" of Gemini (The width of your fist, held at arm's length roughly corresponds to 10-degrees).