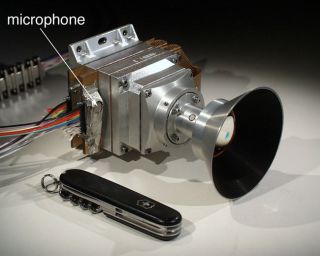 Delivered for the Mars Surveyor 2001 Lander, the Mars Descent Imager (MARDI) was designed to produce images of the geology around the landing site during landing.
(Image: © NASA/JPL/MLSS.)

NASAscientists hope to hear what it sounds like on the surface of Mars for thefirst time when they attempt to switch on the Phoenix Mars Lander?s microphonein the next week or two, mission leaders announced on Monday.

Phoenix's microphone is a part of the MarsDescent Imager system that was included on the underside of the lander to takedownward-looking images during the three minutes of descent before thespacecraft touched down on the planet's surface. The MARDI on Phoenix wasoriginally designed for the Mars Surveyor 2001 Lander missions, which wereeventually canceled. The system is also similar to the one aboard 1999'sill-fated Mars Polar Lander.

The plan touse the imager and microphone on May 25 (when Phoenixlanded) were scrapped when tests showed that using the system would createan unacceptable risk to a safe landing for Phoenix.

Phoenix did safely land at its appointedside in the Martian arctic, where it has been digging up samples of dirt andsubsurface water ice and analyzing them with its instruments to assess theplanet's pastpotential habitability.

Though theoriginal plan to use Phoenix's mike during landing was scrapped, missionscientists didn't rule out using it later during the mission.

"We'dalways hoped to turn it on," Smith said.

The teamneeded NASA's approval for funding to turn on the microphone, and now they'vegotten the go-ahead, Smith said.

They can'tflip the switch right away ? there are still a few checks that need to be done,and Phoenix's software needs to be changed a bit, Smith told SPACE.com.

"We'rejust kind of cranking it up," he said.

Once allthe preparations are ready, the team plans to try to turn the microphone onwhile the lander is digging or usingthe rasp on the end of its robotic arm scoop, "just to make sure wehear something," Smith said. "You at least want to know if there's achance of noise being created."

Phoenix scientists aren't sure just what,or how much, they'll hear. For one thing, Phoenix's mike is "not aprofessional microphone," Smith said (he likened it to the microphonesused on a standard cell phone).

Foranother, sound waves don'ttravel as far on Mars as they do on Earth because Mars' atmosphere isthinner. It would be similar to listening to sound at an altitude of about100,000 feet (30,500 meters) above Earth's surface, Smith said.

If the teamcan hear Phoenix's operations, they'll then turn the microphone on while Phoenix is quiet and just see what they can hear. What that might be, Smith isn't certain.

In additionto potentially hearing Martian sounds, the Descent Imager system will take apicture once it's switched on, Smith said.

Onepotential photographic subject is the HolyCow ice feature directly underneath the lander. The ice was exposed when Phoenix's thrusters pushed away the dirt lying on top of it during landing. The featurewas first imaged by Phoenix's robotic arm camera.

The imagermight also catch a glimpse of some so-called "barnacles" attached to Phoenix's legs. Smith describes these as "bright dots on the legs" that arepieces of the Martian surface that were splashed onto the legs by the thrustersduring landing.

Some of thedots have grown and some have moved around over the course of the mission,which is now entering its fifth month on the Martian surface. Missionscientists aren't sure why the dots have such unusual behavior.