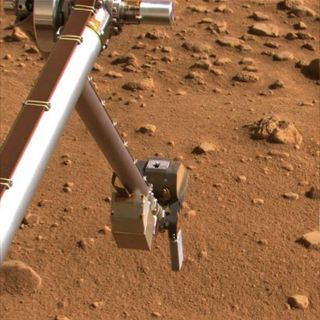 NASA's Phoenix Mars Lander has begun using a special rasptool to shave off bits of the hard icy material on the Martian ground.

The rasp is a motorized tool attached to the back of thelander's robotic arm scoop, which scientists hope will be able to grind enoughice off the ground to eventually use as a sample in Phoenix's Thermal andEvolved-Gas Analyzer (TEGA) oven instrument.

The hard ice beneath the surface in the north polar regionsof Mars, where Phoenixlanded May 25, has so far been difficultfor the probe to dig into, but mission scientists say the rasp may be thetool that helps get the job done.

"While Phoenix was in development, we added the rasp tothe robotic arm design specifically to grind into very hard surface ice,"said Barry Goldstein, Phoenix project manager at NASA's Jet PropulsionLaboratory in Pasadena, Calif. "This is the exactly the situation we findwe are facing on Mars, so we believe we have the right tool for the job.Honeybee Robotics in New York City did a heroic job of designing and deliveringthe rasp on a very short schedule."

The motorized rasp bit extends from the back of the scooptool on the end of Phoenix's 2.35-meter-long (7.7-foot-long) robotic arm. Thetool works by shaving sideways into the ground, kicking up dirt and ice onto acollection surface in the scoop.

In recent days, Phoenix has used its robotic arm to clearthe top layer of dirt from a large swath of ice in a trench it dug called SnowWhite. Phoenix was scheduled to spend Tuesday rasping into the hard material intwo spots at the bottom of the trench. Mission scientists hope in the comingdays it will have collected enough ice to transfer to TEGA for a bakingexperiment to learn more about the ice's composition.