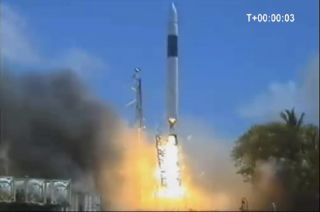 The two-stage Falcon 1 rocket built by Space Exploration Technologies (SpaceX) lifted off at about 7:15 p.m. EDT (2315 GMT) from the U.S. Army's Ronald Reagan Ballistic Defense Test Site on the Kwajalein Atoll in the about 2,500 miles (4,023 km) southwest of Hawaii. The successful space shot came less than a month after an engine timing error during stage separation doomed SpaceX's third Falcon 1 test.

"As the saying goes, the fourth time's the charm," SpaceX CEO Elon Musk told an elated group of 500 employees at his Hawthorne, Calif.-based headquarters. "This is one of the best days of my life."

SpaceX's first three attempts to launch a Falcon 1 rocket ended in failure. The first try ended with a fuel leak and fire just after launch in March 2006. A second attempt nearly reached orbit, but the rocket's second stage engine shut down early 180 miles (289 km) above Earth. On Aug. 2, an engine timing issue caused the rocket's first stage to separate, and then collide with the second stage, dooming the attempted launch.

But for the fourth Falcon 1 test, all appeared to go as planned, with cheers erupting from SpaceX employees at each flight milestone that could be heard during the launch broadcast. After restarting its second stage engine, the Falcon 1 rocket successfully reached its intended orbit that ranged from 310 to 434 miles (500-700 km).

"The team is elated and ecstatic," Musk told reporters after the launch. "It's just, people feel vindicated."

The Falcon 1 rocket is the first in a planned family of Falcon boosters under development by SpaceX. Its engines burn liquid oxygen and kerosene, and the first stage is intended to splash down in the Pacific Ocean to be recovered for reuse, but better heat shielding is needed before that is perfected, Musk said.

The booster stands 68 feet tall (21 meters) tall and is designed to haul payloads of up to about 1,256 pounds (570 kg) to low-Earth orbit. For Sunday night's launch, it carried a simple, 364-pound (165-kg) mass simulator that mimicked an actual satellite.

Musk said his team nicknamed the mock satellite Ratsat — it's emblazoned with a rat logo —and it should stay in orbit between five and 10 years.

"This was the smoothest launch countdown of all," Musk said. "It just shows the team is getting more and more practice at this."

SpaceX plans to launch the fifth Falcon 1 rocket in early 2009 to launch a Malaysian satellite and several piggyback payloads into orbit.

The rocket costs about $8 million per flight, Musk said, adding that rates for future flights could go down if first stage reusability is perfected. But the cost to develop and test the booster, including all three failed launches, came in at around$100 million, he added.

"It's great to have this giant monkey off my back," said Musk, adding that he serves as the Falcon 1's chief designer in addition to his role as CEO.

SpaceX is also developing the Falcon 9 rocket and Dragon orbital spacecraft in the hopes of providing cargo launch services to the International Space Station for NASA.Musk told his employees that future plans include designs for human space flight as well. By the year's end, its new larger rocket — the Falcon 9 — is due to be delivered to its launch site in Cape Canaveral,Fla., for a planned summer 2009 test, Musk said.

But for now, Musk told his employees that celebration was in order to mark the firm's first orbital success after three false starts and six years of work.

"I'm going to have a really great party tonight, I don't know about you guys!" Musk told his SpaceX team. "Congratulations everyone, this is your hard work that made this happen."