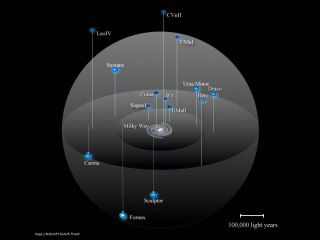 A study of small galaxies circling around the Milky Way foundthat while they range dramatically in brightness, they all surprisingly pack aboutthe same mass. The work suggests there is a minimum size for galaxies, and itcould shed light on mysterious dark matter.

Spinning around the Milky Way are at least 23 pint-sizedgalaxies, each shining with the light of anywhere from a thousand to a billionsuns. Though each of these galaxies is very dim compared to large galaxies likeour own, they span a large range in brightness.

Astronomers led by Louis Strigari of the University ofCalifornia-Irvine studied the movements of individual stars in these satellitegalaxies to determine the mass of each galaxy.

"What we found was astonishing, which was that they allhad the same mass," said researcher James Bullock, a UC-Irvineastrophysicist. "It's not what we were expecting ? we were really takenoff guard."

The finding could help explain the mysterious stuff calleddark matter and how it affects the formation of galaxies. Nobody knows whatdark matter is, but its presence is revealed by gravity that is not produced bythe regular matter that can be seen.

Despite their wide-ranging brightnesses, all of the 23satellite galaxies around the Milky Way seem to have a central mass of 10million times that of the sun. And what's more, almost all of that mass seemsto be made up of dark matter, with just the tiniest smidgen of visible matter producingstars.

"These are by far the dimmest galaxies that have everbeen discovered, and the least luminous of these things are the mostdark-matter-dominated things that we know about," Bullock told SPACE.com.

Though they qualify as galaxies, the satellites are notpinwheel spirals like the Milky Way and its cousins. Rather, these dwarfgalaxies look more like diffuse, puffy balls of light.

The fact that these galaxies, the smallest ever seen, allweigh about the same may mean that there is a lower threshold for the mass ofgalaxies. Though as to why there would be a minimum galactic size, "I haveto say right now we're totally at a loss," Bullock said.

The researchers do have some ideas, though.

For one, maybe there are no darkmatter clumps smaller than these galaxies, and their size represents thecritical mass necessary for dark matter to condense into a clump.

"Maybe we've kind of hit a limit of how dark matter cancluster, and if that?s true, maybe that tells us something about the darkmatter particle itself," Bullock said.

Another option is that dark matter can form smaller clumpsthan these, but it just can't give rise to visible-light galaxies, he said.Perhaps the process of galaxy formation, which isn't fully understood, dependson having a minimum mass to begin with.

"You can think of a dark matter clump as a well, andthe more massive the dark matter clump, the deeper that well is, and the harderit is for the normal matter to float out of it," Bullock said. "Itcould be that there are smaller clumps, but their wells are so shallow that anynormal matter just falls right out."

The hunt for dark matter

The astronomers want to do further research, such as adetailed study of the satellite galaxies around our neighbor, theAndromeda galaxy, to probe the meaning of their discovery.

"We want to try to figure out if what we're learning isreally a limit on how massive a clump of dark matter can be, or just a limit onmassive a galaxy can be," Bullock said.

The researchers hope that by combining their findings withnew observations and predictions made by theoretical models of dark matter,scientists may ultimately get to the bottom of what dark matter is made of.

At the very least, the discovery raises many new questions.

"These are very intriguing results, absolutely,"said Savvas Koushiappas, a physicist at Brown University who was not involvedin the study. "The thing I find extremely puzzling is, well, what doesthis tell us about physics? Is it truly a problem with [galaxy formation], oris it touching something fundamental about dark matter? It's a very interestingresult and deserves attention, and it's something that now we have to thinkabout. We have a lot of work to do."

The scientists detail their findings in the Aug. 28 issue ofthe journal Nature.