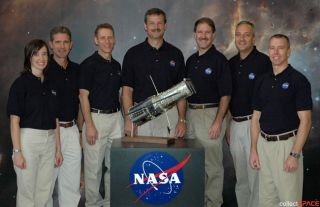 Seven NASAastronauts are eagerly looking forward to a risky, but pivotal, shuttle flightto the Hubble Space Telescope this fall.

Veteranshuttle commander Scott Altman and his crew are preparing to launch in earlyOctober aboard the Atlantis orbiter on what is expected to be NASA?s finalservice call on the iconic space observatory. The telescope passed its 100,000th orbitaround Earth on Monday.

?What wewant to do, though, is refurbish the Hubble so that it can operate as long aspossible,? Altman said during a series of NASA interviews released on Monday.?We?re going to add some new instruments ? and then we?re going to go in andkind of do internal surgery on some instruments that are already in thetelescope.?

But theirmission is not without risk. Unlike all of NASA?s shuttle missions since the2003 Columbia tragedy, Atlantis is not headed for the International SpaceStation, where astronauts can take refuge and await rescue if their shuttle?sheat shield is critically damaged.

The Hubbletelescope circles the Earth in a higher orbit and different inclination thanthe space station, so Atlantis astronauts will not be able to reach the orbitallaboratory if the shuttle is damaged.

Instead,NASA is priminga second space shuttle, Atlantis?s sister ship Endeavour, and afour-astronaut crew for a rescue mission that the agency hopes it will neverneed. Altman and his crew will carry 25 days' worth extra of food and other suppliesalong with Hubble?s new instruments as a precaution in case they should need anorbital rescue.

Under theplan, Endeavour would rendezvous with Atlantis within a 25-day window, grapplethe orbiter with its robotic arm, and then astronauts would stage a series ofspacewalks to transfer from the stricken ship. The return trip aboard Endeavourwould be a bit cozy, with 11 astronauts in a vehicle that has at most hostedeight, the astronauts said.

?The wholeconcept of going somewhere where you don?t have a place to shelter, like thespace station, was a little different,? Altman said, adding that some dedicatedengineers came up with what he believes is a good contingency plan. ?It?s avery low probability of an event, but I?m glad that there?s a relatively robustplan to deal with it if it did happen.?

NASAinitially canceled Atlantis?s STS-125 mission to Hubble after the tragic 2003loss of Columbia and its seven-astronaut crew. It revived theservice call, first with a robotic mission and later with a crewed flightin 2006, following widespread disapproval from scientists and the public.

Despite theadded risk of flying to the space telescope with out the space station as asafe haven, Atlantis astronauts said their flight is more than worth it. Thenew mission, NASA?s fifth and last shuttle flight to Hubble since its April1990 launch, is expected to extendthe telescope?s life through at least 2013 and leave it more powerful thanever before.

?The HubbleSpace Telescope is more than remarkable,? said Grunsfeld, anastronomer-turned-astronaut who is making his fifth career spaceflight andthird visit to the orbital observatory. ?It has answered just so many of thosefundamental questions that people have been asking about the cosmos sincepeople were able to ask questions.?

?I think itwill be a pretty special moment for all of us,? McArthur said of leaving Hubbleafter the service call is complete. ?I don?t really know how that?s going to feel.?