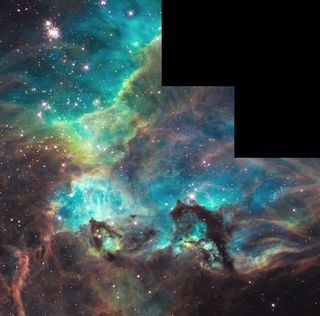 In commemoration of the NASA/ESA Hubble Space Telescope completing its 100 000th orbit around the Earth in its 18th year of exploration and discovery, scientists aimed Hubble at part of nebula near the star cluster NGC 2074 (upper, left), a dazzling region of celestial birth and renewal.
(Image: © NASA, ESA and M. Livio (STScI))

The belovedobservatory has been faithfully circling Earth since its April 1990 launch,offering us Earthlings glimpses of the cosmos as we've never had before.

Now,after travelling around Earth at nearly five miles per second for 100,000orbits, Hubble's odometer reads about 2.72 billion miles ? that's roughly 5,700round trips to the Moon. To mark the event, scientists turned Hubble's cameraeye toward partof a nebula near the star cluster NGC 2074, which is about 170,000light-years from Earth near the Tarantula nebula.

"That'sa lot of orbits and that represents a lot of miles and a lot oftime," said HST deputy senior project scientist Malcolm Niedner."It's been just a fabulous long journey of scientific discoveries, withmore to come."

Despitewear and tear from micrometeorite impacts and temperature extremes in orbit,the telescope is still going strong after 18 years in orbit, and hascontributed to thousands of scientific discoveries.

"It'sexplored entirely new grounds in terms of the ability to see things in detail,and what has resulted from that is just marvelous," said Bob O'Dell, anastronomer at Vanderbilt University in Tennessee, who started as a NASA projectscientist for Hubble 19 years before its launch, helping to get the project offthe ground. "Something like the HubbleDeep Field, which has penetrated far back in time, is the kind of thingthat we'd always hoped to be able to do."

Becauseof its unprecedented contribution to science, the telescope holds a specialplace in many scientists' hearts.

"For me it's special because I usedthis to discover the farthest planet that has ever been discovered," saidKailash Sahu, an astronomer at the Space Telescope Science Institute who usedHubble to observe exoplanets 26,000 light-years away. "My own program wasto discover extrasolar planets at the farthest ranges we can see. HST is theonly one which can do that."

Because itviews from space, beyond Earth's atmosphere, Hubble can beat ground-basedobservatories much larger than it in terms of resolution.

"Personally,my work in black holes would not have been possible without HST, showing thatnearly all galaxies contain a massive black hole in their center and that theblack hole is an essential component for why galaxies look the way theydo," said University of Texas astronomer Karl Gebhardt.

Thetelescope has endured ups and downs, especially an early post-launch scare thatit would never see as it was supposed to, after scientists discovered that itsmain mirror was ground to the wrong shape. But astronauts were able to correctthe flaw during a space shuttle repair mission in 1993, and subsequent tune-upshave kept Hubble highly functional most of the time.

"It'sbeen a great ride," O'Dell said. "We're still doing good science withit, and what appears to threaten its lifetime is not the spacecraft itself butrather our ability to send vehicles up for maintenance."

Theobservatory is set to have its fifth, and final, face-liftin October, when the space shuttle Atlantis visits the orbiting scope.Astronauts plan to install new equipment and repair broken instruments duringfive spacewalks.

The tune-upshould extend Hubble's life until at least 2013. By that time, NASA's shuttlefleet will likely be retired and the telescope could face destruction byburning up in the atmosphere during a controlled dive down to Earth.

When itfinally does retire, it will leave big shoes to fill.

"Iwould say its biggest legacy would be that wherever it looked with its reallybroad range of capabilities, it found new things, many of which people couldn'thave even dreamed of," Niedner said. "It's been an exciting,unpredictable journey with great surprises."

And whileHubble's aid to science has been enormous, its effect on the public'sappreciation of science may be even more noteworthy.

"Whatis arguably the most important contribution has been the inclusion of thepublic in the science from HST," Gebhardt told SPACE.com. "Thereal contribution from HST has yet to be realized, as it has hopefully inspireda generation of scientists to be leaders for the U.S. and the world."