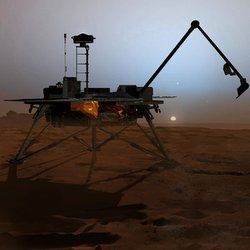 NASA'sPhoenix Mars Lander might be digging up the surface of the red planet forlonger than expected. Mission controllers have requested an extension to thespacecraft's work on the planet's surface, SPACE.com has learned.

The $420million mission has been investigating the dirt and ice of the northern reachesof Mars since it landedon May 25. The mission was slated to last for 90 sols, or Martian days(about 92 Earth days), ending at the end of August. Now it could be extendedanother 30 sols.

Because ofthe landing spot in the north polar region, the mission can't continue forever. Phoenix uses its two-wing solar array to convert sunlight into electricity topower its instruments, storing some power in a pair of rechargeable batteries. However, Phoenix's landing site is above Mars' Arctic Circle, so the sun isn't upduring the whole Martian year and there eventually will be too little sunlightto power the instruments. (The sun is above the horizon all summer, then beginsto set below the horizon come fall as it sets for the entire winter ? just asthe sun does above the Arctic Circle on Earth.)

But withthe success of the mission so far, and indications that Phoenix will be able tokeep going until the arctic region plunges into the long darkness of winter,mission scientists want to keep going.

"Wethink that there's enough energy to continue digging and delivery toinstruments through at least 120 sols, and then after that, our energy startsto go down, but we can still do operations as a weather station," said Phoenix robotic arm co-investigator Ray Arvidson of Washington University in St. Louis.

Phoenix hasbeen digging up samples of Martian dirt and the rock-hardice layer that lies underneath for testing in its onboard instruments todetermine their composition and look for signs that Mars may have beenhabitable at some point in its past.

If the teamgets permission to extend the mission, they'll likely have at least another 30days of digging, Arvidson told SPACE.com, adding that the team will"try to dig as long as we can and the resources permit."

Phoenix will also use it stereo camera,lidar instrument and other meteorological instruments to photograph the surfaceand make measurements of the Martian weather.

But theseplans are "all predicated on permission to have an extended mission andfinances, so that's all being negotiated right now with NASAheadquarters," Arvidson said. He didn't know when NASA might decidewhether or not to extend the mission.

Themissions of NASA's Mars Exploration Rovers, Spirit and Opportunity, have alsolasted longer than originally anticipated. The primary missions for each roverlasted for 90 days in 2003. The rovers are still trundling around the Martiansurface more than four years later, thanks to dust storms that cleared dust offthe vehicles' solar panels.

InNovember, Mars dips behind the sun and out of our view, but will eventuallyre-emerge. "Hopefully we'll still be alive after that," Arvidson saidof Phoenix, so that the lander can continue making a few last measurements, ifthe extension plan is approved.

The settingMartian sun will gradually diminish the amount of energy available to Phoenixvia its solar panels. ) As the sun sets and winter approaches, the temperatureat Phoenix's landing site will start dropping and carbon dioxide ice willprecipitate out of the atmosphere.

"Asthe seasons move from fall to winter on Mars ? it's something like 20 to 30centimeters [about 8 to 12 inches] of CO2 ice forms out of the atmosphere,"Arvidson said.

The colderwinter temperatures and carbon dioxide ice accumulating on the spacecraft willultimately spell its end, because the craft is not built to withstand thesefrigid conditions. Phoenix won't rise from the ashes when the sun comes upagain in the Martian spring.