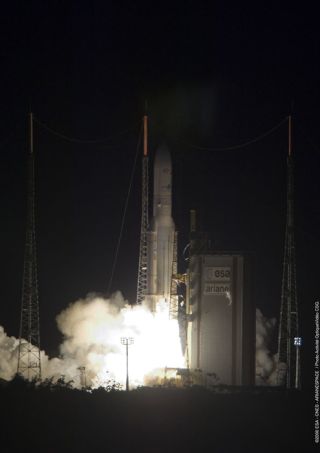 PARIS -Europe's Ariane 5 ECA rocket successfully placed a British militarytelecommunications satellite and a Turkish commercial spacecraft into orbitJune 12 in the third of seven Ariane 5 liftoffs planned for 2008 and the 25thconsecutive Ariane 5 launch success.

The launchof the Skynet 5C telecommunications satellite completes the Skynet 5 in-orbitfleet and follows the Skynet 5A and 5B launches in March and November 2007.

The Skynet 5satellites are owned and operatedby Paradigm Secure Communications Ltd. of Britain, an Astrium Servicessubsidiary that is under a long-term contract with the British Defence Ministryto provide beyond-line-of-sight communications to British military forces until2020. The British military makes annual lease payments in return for aguaranteed level of telecommunications capacity and does not own theinfrastructure. Paradigm is free to sell excess Skynet capacity to othercustomers. The business model is unique in its scope and volume -- 3.6 billionBritish pounds ($7 billion) - and is being closely watched by other governmentsin Europe and elsewhere.

The threeSkynet 5 spacecraft are Eurostar E3000 model satellites built by AstriumSatellites, which like Astrium Services is owned by the EADS aerospaceconglomerate. Astrium's other space division - Astrium Space Transportation -is prime contractor for the Ariane 5 rocket.

Skynet 5Cweighed 4,638 kilograms at launch and is expected to operate in orbit for 15years. Its initial position will be at 17.8 degrees west longitude.

PatrickWood, Skynet program manager at Paradigm, said the Skynet 5C satellite wasdelivered ahead of the schedule set eight years ago when the satellite contractwas signed.

Turksat 3A,weighing 3,110 kilograms at launch and carrying 24 Ku-band transponders, wasbuilt by Thales Alenia Space of France and Italy and will replace the retiringTurksat 1C satellite at Turkey's 42 degrees east longitude slot. The satelliteis owned by Turksat AS of Ankara.

In anaddress broadcast at the Guiana Space Center spaceport in French Guiana afterthe launch, Turkish Transport Minister Binali Yildirim said Turksat 3A willsell capacity to a large number of countries in the region. He said numerousTurkish engineers had worked with Thales Alenia Space in France to buildTurksat 3A.