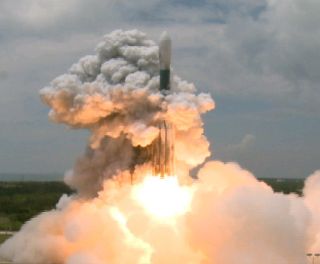 The Gamma-ray Large Area Telescope (GLAST), lifted off atopa Delta 2 rocket from Florida's Cape Canaveral Air Force Station at 12:05 p.m.EDT (1605 GMT). The launch was delayed by about 20 minutes due to a long-rangetracking glitch. Now the nearly five-ton observatory is headed for an orbitabout 345 miles (555 km) above Earth.

GLAST includes two main telescopes designed to scan the skyin gamma-raylight - the most energetic region of the electromagnetic spectrum, farbeyond the visible range of the human eye.

"Astrophysicists couldn't be happier about the launchof GLAST and the discoveries it will make," said Jon Morse, director of NASA?sastrophysics division at the agency?s headquarters in Washington, D.C. "We'rereally at a unique time in the history of science and of astronomy, that we canstudy the cosmos across the entire electromagnetic spectrum for the first time ?GLAST is one of those missions where we're extending our reachsignificantly."

Scientists hope the telescope will help solve some of mostbefuddling cosmic mysteries, such as the nature of dark matter, the workings ofblack holes, and the mechanics of lighthouse-like spinning pulsars.

Since GLAST will open up a window on a previously unexploredenergy range in the universe, it will truly be venturing into unchartedterritory.

"I'm expecting that the most important science GLAST isgoing to do is actually not yet on anybody's list," said Steven Ritz, aGLAST project scientist and astrophysicist at NASA's Goddard Space FlightCenter in Greenbelt, Md. "What we're very excited about are thesurprises."

The $690million telescope is the result of almost two decades of work by scores ofscientists around the world, including researchers in the United States,France, Germany, Japan, Sweden and Italy.

"GLAST is a unique collaboration between particlephysicists and astrophysicists across six countries," said Julie McEnery,GLAST's deputy project scientist, before the launch on Wednesday."Together we've been able to work to produce an extraordinary observatorywith special instruments to detect gamma rays with superb accuracy."

Today's successful launch comes as a relief to eagerscientists who have been waiting for the telescope to lift off since itsoriginal intended launch date, May 16. GLAST's voyage has been postponedrepeatedly because of delays in preparing the observatory as well as issueswith the rocket that is slated to deliver it to space.

Once it arrives in orbit and sheds its casing, the telescopewill unfurl giant solar array wings to provide it with power. It will startrelaying data down to Earth within a few minutes, mission managers said, andfor the first couple of weeks the ground team will perform tests to ensure the observatoryis in good health.