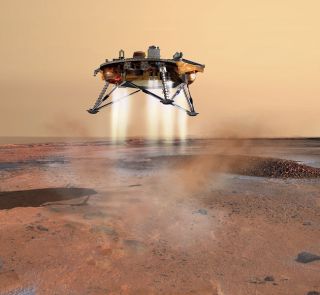 On Sunday,May 25, the Phoenix Lab lands onMars to look for evidence of water and organics in the soil. Likeits namesake mythological bird, NASA's Phoenix Mission rises from remnants ofits predecessors. It will use many components of a spacecraft originally builtfor a 2001 Mars lander mission that were kept in careful storage after thatmission was cancelled.

Long-timescientist in SETI Institute's Carl Sagan Center, geologist John Marshallstudies dust here on Earth. As a science team member of Phoenix, he will applyhis skills to understanding the soil and dust on Mars. Don't think of him asthe "dustman"; rather, he's a geologist who works at the microscopicscale. He studies dust to understand how water and wind have altered thesurface of the tiny bits of rock to learn about the geological history ofmaterials here on Earth, and soon, on Mars.

Marshall works on the Microscopy,Electrochemistry and Conductivity Analyzer (MECA), which has several components. Optical and atomic-force microscopeswill examine samples' mineral grains. Marshall is lead scientist forinterpreting data from the optical microscope. Last week, thiscolumn profiled RichardQuinn, who is a scientist on the team responsible for the fourelectrochemistry cells that will measure a wide range of chemical properties,such as the presence of dissolved salts and the level of acidity or alkalinity.The third component of MECA is a conductivity probe mounted on the robotic armthat will check the soil's thermal and electrical properties.

Marshall describes himself as a scientistfor the optical microscope; he's the only geological microscopist working withthis instrument. The remainder of the team are primarily technicalmicroscopists who made sure the instrument was designed and testedsuccessfully, and will be working correctly to do science. The opticalmicroscope is set up to image at least 10 samples. He anticipates that will besufficient, but if the onboard cameras reveal other intriguing targets withinreach, the group can re-use the sample equipment to do further studies.

I asked Marshall what he'd like to see, and he replied, "I'll be looking for evidence ofwater activity in the particles. Water rounds particles as they tumble about,smoothing off the edges and corners. Water can also etch particles that simplysit submerged for a length of time. Clay particles are direct evidence ofwater. I'll also look for crystallization and hydrated minerals. All of thesecan be interpreted as evidence of water."

Water isessential for life as we know it. Understanding the history of water at this Arctic-likesite will reveal whether it is habitable, either in the past or present. In thetiny bits of dust, Marshall expects to seek evidence of water onMars. There's ice only centimeters below the surface at the landing site,which leaves little doubt that water exists on Mars. The core question iswhether there were lakes and rivers on Mars in the past. Marshall thinks thatthe physical shape, size and condition of dust particles can help answer thisquestion.

But, whatmight the Phoenix lander actually sample? Marshall described the landing siteas an ejecta blanket. He anticipates seeing volcanic particles (basalts),weathered aeolian dust deposited by the major dust storms that envelop Marsperiodically, and sand-sized particles. He also expects to find concrete-hardice just below the surface. One of the planned activities for the mission is todig a trench to profile the soil. If the ice is shallow, the profiles will belimited. It's hard to predict what will actually occur.

The PhoenixLab uses pulsed engines to slow descentto the surface. In preparation for this, Marshall was also part of a teamthat tested the impact of the landing system at NASA Ames Research Center, working with Lockheed Martin, Jet Propulsion Laboratory, and University of Michigan. They modeled the impact of the pulsed engines on soil disturbance, and field-testedan engine in a mock-Mars landscape to understand what might happen when Phoenix lands. The team anticipates that the pulsed engines could excavate dust frombeneath the lander and erode particles from the bottom of the lander out ontothe surrounding area. The scattered dust might include contaminants from theundersurface of the lander. I asked whether this could confuse results, and Marshall was confident that it would not because the likelihood of actually picking up atiny bit from the lander was very low.

OnSaturday, Marshall heads to Tucson, Arizona to be present for the landing andcelebrate with the whole team as Phoenix sets down on Mars. Bon voyage, John,and best wishes for a happy landing.