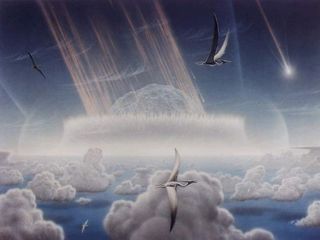 A large body of scientific evidence now exists that supports the hypothesis that a major impact occurred in the Caribbean region at the boundary of the Cretaceous and Tertiary periods in Earth's geologic history. Such an impact is suspected to be responsible for the mass extinction of many species, including the large dinosaurs, that marked the end of the Cretaceous period. Illustration
(Image: © Don Davis)

The sun bounces up and down as it roams the Milky Way, and suchwavering might have hurled showers of comets Earth's way that caused massextinctions, including the one that killed the dinosaurs, a new study claims.

Such cosmic impacts might also have spread life to alien worlds,scientists speculate.

However, doubts have been raised about these suggestions.

To arrive at the comet showersidea, astronomers calculated the path of our solar system across the Milky Wayas it circles the galactic core. As we pass through the densest part of thegalactic disk, the gravitational pull of the surrounding gas and dust cloudsdislodges comets in the Oort Cloud in the outer solar system, causing these icygoliaths to plunge toward the sun, the researchers said.

The sun passes through this galactic zone every 35 million to 40million years, raising the chances of comets hurtling inward tenfold, accordingto calculations. This cycle seems to coincide with evidence of craters and massextinctions on Earth, which suggest we suffer more collisions roughly every36 million years.

"It's a beautiful match between what we see on the ground andwhat is expected from the galactic record," said researcher WilliamNapier, an astronomer at the Cardiff Center for Astrobiology in Wales. He andhis colleague Janaki Wickramasinghe will detail their findings in a forthcomingissue of the Monthly Notices of the Royal Astronomical Society.

Although the solar bounce cycle may have been killer news for non-aviandinosaurs, pterosaurs, plesiosaurs, mosasaurs, and the many plant andinvertebrate species that went extinct 65 million years ago, it may also have helpedlife spread to other planets. The comets may have blasted microbes off Earththat can withstand the interstellar void.

"Microorganisms thrown into space from this barrage can passstraight into star- and planet-forming regions within the nebula, without beingsterilized en route by cosmic rays," Napier told SPACE.com."This opens the door to the exciting idea that life may spread not justwithin the solar system, but may be pan-galactic."

However, there is skepticism about these calculations.

"Thewhole concept is wrong," said NASA Jet Propulsion Laboratory astronomerPaul Weissman, who did not participate in this study. "As you cross thegalactic plane, it's not like you go over a speed bump. The variation in anycratering rate would be very gentle, not in sudden pulses."

Othersuggested causes for these supposed comet showers have included a red dwarfstar or a tenth planet in a distant orbit around the sun that dipped into the Oortcloud.

"Manyresearchers, including myself, responded to these ideas, pointing out faults inthe logic. The distant red dwarf star was in a highly unstable orbit that wouldescape to interstellar space after about 10 orbits on average," Weissmansaid. The tenth planet idea never gained any traction because it was difficultto create an orbit with the right characteristics, he added, "and there isno evidence for a large planet beyond Neptune, despite numerous searches."