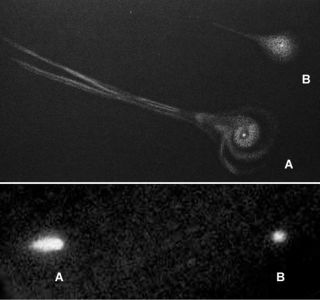 Eachgeneration seems to get a chance, or two, to see a mind-boggling display ofshooting stars one night. The most spectacular displays in my memory are the1999 and 2001 Leonid storms. Before my time, observers swore by the 1966Leonids, and could not stop talking about the spectacular 1933 and 1946Draconid storms. Those were not quite as intense as the Leonids, but theDraconids moved so slowly that several were seen gliding across the sky at thesame time.

In the 19thcentury, the most spectacular storms were the 1872 and 1885 Andromedids, whichwere almost as strong as the Draconids and also very slow moving. At the time,Chinese astronomers wrote: "shooting stars fell like rain." From thecounts of meteors in the west, we now estimate that rates peaked around two persecond.

Some yearsearlier, in 1846, a comet called3D/Biela had been observed to break into at least two pieces. The pieces haddrifted further apart in 1852. Based on the rate of that drift, the moment ofbreakup is thought to have been in either 1842 or early 1843, when the cometwas far from the sun, near Jupiter's orbit. Because of their phenomenalintensity, the Andromedid storms were believed to be caused by Earth travelingthrough the debris created during that breakup.

So, did wepass through the breakup debris of comet 3D/Biela? Astronomer JeremieVaubaillon, now at Caltech, and I decided to investigate. We calculated wherethe debris from 1842/43 would have ended up in the comet orbit and discoveredthat a breakup far from the sun does not disperse dust easily. The dust tendsto keep the same orbital period, returning back at the same time. The cloud ofdust tends to hang around the position of the comet, only gradually lagging thecomet as a whole due to the push of solar radiation.

Weconcluded that Earth has never encountered the debris created during the1842/1843 breakup! So what caused the Andromedid meteor storms? Upon furtherreflection, we calculated that Earth had passed through the dust trails thatwere generated when the two fragments came back towards the sun in 1846 and1852. Ejection close to the sun results in higher ejection speeds and thus arelatively large variation of orbital periods. After one orbit, some dustreturns early, other dust late, and thus all dust spreads out along the cometorbit much more quickly. We found that the planets happened to steer those newdust trails into Earth's path every time when observers on the ground noticedunusual Andromedid rates in later years.

What ifEarth would have crossed the dense cloud of debris of the broken comet shortlyafter 1843? The resulting meteor storm would have been a hundred times moreintense, if not more. The impressive storms of 1872 and 1885 were caused by atiny bit of dust, we estimate 30 times less than what came off during theinitial breakup. Moreover, that dust had spread out quite a bit. Just imaginewhat could have been. We appear to have missed out on a truly spectacularsight.

Then again,the next generation may be in for a surprise. The Andromedids have moved on andnow pass far from Earth's orbit, but other comets continue to break and createnew meteoroid streams. One date to keep in mind is May 31, 2022, when Earthwill pass very close to (but perhaps will just miss) debris created during the1995 breakup of comet 73P/Schwassmann-Wachmann 3. And there may be others; wedon't know yet what dormant comet nuclei may be out there that could break anytime now.

Read moreabout these calculations in the paper "3D/Biela and the Andromedids:Fragmenting versus sublimating comets," by P. Jenniskens and J. Vaubaillon(Astronomical Journal, 134, 1037-1045).