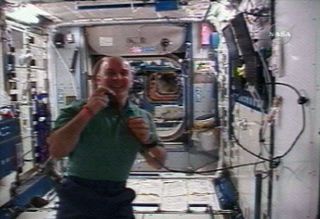 American astronaut Garrett Reisman smiles while describing space living with comedian Stephen Colbert during a May 8, 2008 taping of the 'Colbert Report' from aboard the ISS. His Colbert-supporting Wrist Strong bracelet is visible at on his right hand (left side of image).
(Image: © NASA TV.)

Riesman, aflight engineer for the station?s Expedition 17 mission, spoke with Colbert about lifein space and his three-month mission for tonight?s episode ofthe faux-conservative show ?The Colbert Report? on Comedy Central.

?I can?tbelieve my voice is being broadcast to space right now. I should say somethingreally profound,? Colbert said during the interview broadcast on NASA TV. ?Eatit, Jon Stewart, I?m talking to space!?

Describinghimself as a ?glorified janitor,? Reisman explainedhis duties as Flight Engineer 2 — to perform science experiments and clean thespace station. He arrived at the orbiting lab in March and is slated to returnto Earth next month aboard the spaceshuttle Discovery.

?I do haveto admit though that we don?t really have laser cannons, but sometimes I liketo pretend,? Reisman said.

Colbert andReisman discussed a litany of topics ranging from thestation?s Russian crewmates and ice cream to the mechanics of the orbitinglaboratory?s space potty and, oddly enough, his formercommander?s affinity for non-alcoholic, margarita-flavored Jell-O.

Reisman,who is makinghis first spaceflight during the long-duration Expedition 17 mission, hasalso served on a NASA trek to the Aquarius undersealaboratory on the bottom of the Atlantic Ocean.

?What doyou have against the rest of humanity that you have to flee from us?? Colbertasked.

?I thinkit?s more what the rest of humanity has against me,? Reismanshot back with a grin. ?I keep getting sent to these far off places.?