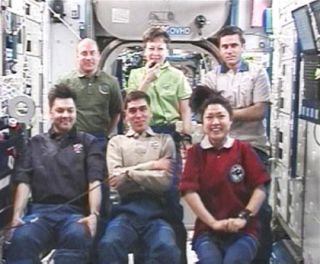 South Korea?sfirst astronaut is sharing some hearty laughs and traditional - but extra spicy- space food with U.S. and Russian crewmates aboard the International SpaceStation (ISS).

After aweek in space, South Korean bioengineer So-yeon Yi, 29, told reporters Tuesdaythat her mission is going well and that her country?s space food is apparentlya hit aboard the ISS.

?It?s very delicious,?said second-generation Russian cosmonaut Sergei Volkov, commander of thestation?s new Expedition 17 crew, via a space-to-ground video link. ?Of course,it?s very spicy for sure. Despite the fact that you want things spicy when youget up here, it was a bit more spicy than we expected or required.?

?The mostfantastic thing is that I cannot feel my weight, and I can fly around likePeter Pan,? Yi told reporters. ?Earth is really beautiful.?

In additionto her experiment equipment, Yi packed Korean kimchi and other traditionalfoods to share with her U.S. and Russian crewmates during a holiday meal onApril 12, which Russia celebrates as Cosmonautics Day.

"Theirreaction was particularly good for instant noodles, kimchi and chilipaste," the Korean news agency Yonhap quoted Yi as saying on April13. "I am not certain if they will become common fare in space, but othersenjoyed the food I brought and if there are any left I plan to leave somebehind for others to enjoy."

Yi willreturn to Earth on Saturday with Whitson and Malenchenko aboard their SoyuzTMA-11 spacecraft.

?So-yeonhas done a phenomenal job while she?s been up here. It?s great having her laughand smile,? said a smiling Whitson, who is wrapping up a six-month mission withMalenchenko. ?And we enjoyed the Korean food. Some of us like it spicy.?

Yi isflying under a commercial agreement between Russia and South Korea, and wasinitially selected from a field of 36,000 applicants to serve as a backupastronaut. Yi moved to the prime crew last month after Russian space officialspulled South Korea?s first astronaut, artificial intelligence expert San Ko,from the flight due to reading rule violations.

While Yiperforms a series of experiments and educational events for her country, acrew swap is in full swing between the Expedition 17 and Expedition 16astronauts.

?I have toadmit, I really enjoyed ingressing all the new modules,? said Whitson, who willset a new U.S. record for the most cumulative days in space on Wednesday. ?Ithink we have taken a big step in making it a truly international spacestation.?

Whitson andMalenchenko are due to return to Earth with Yi Saturday, with landing targetedfor about 4:27 a.m. EDT (0827 GMT) on the Central Asian steppes of Kazakhstan.

They areleaving behind crewmate Garret Reisman, who will join Volkov and Kononenko forthe first stage of the six-month Expedition 17 mission. A devoted Yankees fan,Reisman will throw out the ceremonial opening pitch for Wednesday night's game between his beloved team and the Boston Red Sox at Yankee Stadium in New York City from aboard the ISS.

?I?vereally just enjoyed hanging out with both Peggy and Yuri,? Reisman said. ?We?vehad a lot of laughs and some really good times.?