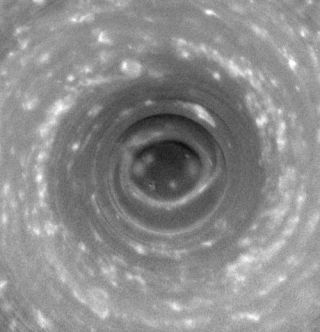 Cassini stares deep into the swirling hurricane-like vortex at Saturn's south pole, where the vertical structure of the clouds is highlighted by shadows. Such a storm, with a well-developed eye ringed by towering clouds, is a phenomenon never before seen on another planet.
(Image: © NASA/JPL/Space Science Institute)

A massivewhirling vortex recently discovered over Saturn's south pole has features thatare similar to hurricanes on Earth and unlike anything astronomers have seenbefore, a new study finds.

The polarvortex was first discovered by NASA's Cassinispacecraft on Oct. 11, 2006, as it flew over the gas giant's south pole.The mass of swirling clouds took scientists by surprise.

"Thisis something we have never seen before," said study team leader UlyanaDyudina of Caltech. "Before Cassini, we didn?t know such a feature could existon the poles."

Dyudina andher colleagues used more than three hours of observations of the vortex toexamine its dynamics and structure. False color images of cloud heights showeda dark, red centraleye similar to those at the center of terrestrial hurricanes, indicatingthat the upper atmosphere in the eye was nearly cloud-free.

Two eye wallsencircle the eye and their clouds rotate in the same direction as the planetdoes, just as they do in hurricanes. Eyes and eye walls have never beenobserved anywhere else except on Earth.

Saturn'spolar vortex is much bigger than any hurricane found on Earth though: Its eyealone measures about 2,500 miles (4,000 kilometers) in diameter, Dyudina told SPACE.com.The eye of a typical terrestrial hurricane is often just 2 or 3 miles wide.

Exactlywhat drives the vortex is uncertain, but it's not the warm ocean moisture thatfuels hurricanes on Earth. Dyudina said that it could be supported by themoisture-driven motion of clouds in the lower atmosphere, but that scientistshave no way to tell just yet.

The vortexalso differs from hurricanes because it is stationary, constantly spinning overthe same portion of the south pole. Polar vortices have been observed on otherplanets (they cover the North and South Pole of Earth), but unlike any of thesevortices, Saturn's coreeye is warm. In contrast, the polar vortices of Earth have cold cores.

As Saturn'syear (about 29.5 Earth-years) shifts so that the sun no longer shines on thesouth pole and begins to illuminate the north pole, Dyudina hopes thatCassini's extended mission will allow scientists to observe indications of anorth pole vortex and to continue observing the south pole vortex to see ifthey are permanent features and how the vortices fit into the planet's overallatmospheric circulation.