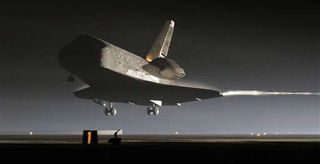 The shuttle touched down at its NASA runway here at the Kennedy Space Center at about 8:39 p.m. EDT (0039 March 27 GMT), announcing its arrival with twin sonic booms as it descended through the dark Florida sky.

?Welcome home, Endeavour!? Mission Control radioed the crew, greeting the astronauts in English, Japanese and French in honor of the nations they represented.

?It was a super rewarding mission, exciting from the start to the ending, and we just thank you for all your help,? shuttle commander Dominic Gorie replied.

Gorie and his STS-123 crew performed five spacewalks to deliver a new Japanese storage room and massive Canadian maintenance robot during their 16-day mission, the longest ever to visit the $100-billion space station.

?Five spacewalks was a pretty daunting task, except for this crew,? Gorie said in a televised interview on Tuesday. ?These guys were awesome.?

Endeavour launched March 11 and circled the Earth 249 times, for a total trip of 6.5 million miles (10.4 million km), during its spaceflight. The shuttle returned to Earth under darkness for NASA's 22nd night landing after thick clouds thwarted an earlier, daytime touchdown.

?I can?t imagine that this mission could have gone any better,? said NASA chief Michael Griffin, adding that the amount of work accomplished by Endeavour?s crew could have filled two missions. ?They made it look easy.?

Endeavour?s STS-123 astronauts not only set a new record for the longest shuttle flight to the space station, but also the most spacewalks in a single construction flight.

?I think anytime you have an ambitious mission like this, you can?t help but wonder how it?s going to unfold,? Gorie said before landing. ?I knew our chances were good, but you never quite know for sure until you pull it off.?

?It was a great moment not only for me, but also for Japan,? said Doi, a Japan Aerospace Exploration Agency (JAXA) astronaut, who delivered the module.

The larger Kibo lab is set to launch in late May aboard NASA?s shuttle Discovery to add yet another room to the now 70 percent complete space station.

?I don?t think you could ever pick a flight that?s been more challenging and rewarding,? Gorie said before landing. ?It?s been a ton of fun.?

Their successful return cleared the orbital track for the European Space Agency?s (ESA) first unmanned cargo ship Jules Verne, which will make a series of practice docking runs near the space station before its planned April 3 rendezvous.

Eyharts, an ESA astronaut, hoped to be aboard the ISS for Jules Verne?s arrival, but took heart in his successful work to activate his space agency?s Columbus lab at the station since its delivery last month. He was looking forward to tasting French food and perhaps a glass of red wine, he said.

?It would have been great, but I think that I was very lucky, so I won?t be complaining,? Eyharts said of missing Jules Verne?s arrival. ?I am happy to go back to Earth and this will be a very nice memory for me.?

Behnken, who is engaged, took his wedding ring and that of his fiancie along for Endeavour?s flight. Linnehan took a photo of a young boy from New Hampshire - his home state - who died as a child, but dreamed of being an astronaut.

?I just thought it would be appropriate. It?s kind of something we all dream about as we grow up,? Linnehan said in a televised interview late Tuesday. ?So we flew his picture and I?m going to return that to his parents when I get back.?

Endeavour?s Wednesday landing completed the spacecraft?s 21st flight and NASA?s 122nd shuttle mission. It was the second of up to six NASA shuttle flights on tap for 2008 and the ninth to fly since the 2003 Columbia accident.

The fuel tank for Discovery?s next launch arrived here at KSC earlier today, later than planned, and will likely delay that shuttle?s launch by several days past its initial May 25 target, Griffin said. The agency is also working to streamline the production of new tanks - which include safety modifications following the 2003 Columbia tragedy - for upcoming flights to minimize delays for those flights.

NASA plans to launch 11 more shuttle flights to complete the space station?s construction and overhaul the Hubble Space Telescope by 2010.

?We have truly globalized the ISS at this point,? said NASA station program manager Mike Suffredini. ?It is without a doubt the largest international project ever attempted by humankind.?