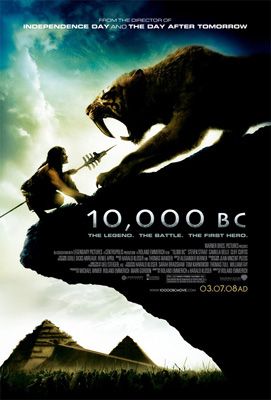 Who doesn’tlike historical epics? Costume dramas that give you an up-close-and-personallook at some musty but meaningful period when life was tough, but big thingswere happening?

Well, givedirector Roland Emmerich credit for attempting a new record in rewinding theclock. He’s dared to take us back to the last ice age, to follow the story of asmall band of our fur-fitted forebears as they mix it up with a non-stop paradeof bad guys. Indeed, the world these heroes occupy seems so riddled withmalevolence, you can understand the incentive somebody might have to flood theplace, and wash away the general pestilence.

“10,000 BC” is one of those ever-popular,journey-to-manhood flicks. In this case an even-tempered stud named D’leh(Steven Strait) - the only guy in town with clean hair - tries to overcome abad rap: his long-gone Dad is accused of cowardice. That’s got to make it toughduring recess, but D’leh shows the schoolyard bullies that he’s got what ittakes by single-handedly bagging a wooly mammoth.This shaggy Pliocene protein seems to be the principal menu item for D’leh’stribe - which is odd, given that they live above the snow line in a range ofmountains that’s more forbidding than the Old Testament. What are mammoth herdsdoing up there, anyway? Even goats would have a tough time finding enough toeat.

Nevermind. D’lehbrings home the proboscidean bacon, and everything is looking good - or atleast as good as things can look in a society where you probably die at ayounger age than your pets - until some prophesied, four-legged demons, aeuphemism for hooligans on horseback, ride into town, ransack the hovels (isthere a reason to bother?), and then ride back out with our hero’s blue-eyedgirlfriend in tow. This ticks D’leh off, and shifts the movie into high gear.

Whatfollows is an epic quest for revenge, and the retrieval of Ms Blue-Eyes - sortof like Virgil’s Aeneid, but without the poetry. D’leh and his buddies passfrom mountains to jungles to sandy deserts as easily as you go fromTomorrowland to Frontierland by turning a Disneylandcorner. They pick up a few allies, confront a few nasty critters(saber-toothed tigers and - get this - carnivorous ostriches), and keepeveryone facing the screen wondering what misery will engulf these guys next.

Anachronismsare thicker than a hippo’s neck here, but it’s all good (if improbable) funthat eventually brings our heroes to the nexus of evil - a large-scaleconstruction project on the relentlessly sandy banks of some river. Well, notreally “some” river, because what the local residents are building - a coupleof giant pyramids, a row of smaller ones, a big ceremonial barque, and asphinx - I mean, do I have to spell it out for you?

Archaeologistswith both expertise and tenure tell us that the great pyramids of Giza wereconstructed around 2,500 BC. However, a few marginal authors and late-nightradio pundits claim they go back about 12,000 years. The chances that this istrue are about the same as the odds that a wormhole will open up in yourbedroom tonight, and whisk you off to the Large Magellanic Cloud for breakfastwith aliens. But in “10,000 BC,” you’ll be able to see this hypothesis writlarge on the special effects canvas. This sequence alone is so oddly imposing,it’s worth the price of admission.

Oh, andthere’s something else to be gleaned from watching this ice-age epic. For thosewho still wonder how ancient peoples could pile up a million squared-off rocksto make Giza’s famous pointy architecture, Emmerich supplies the answer:domesticated wooly mammoths! That’s right; these tusky terrors may be onlysandwich fixings for D’leh, but whoever is building these pyramids has figuredout how to use them to cut the overhead on public works projects. Defanged andtamed, they slog up and down steep ramps, hauling blocks of limestone behind. One assumes that the ramps would soon be adequately, if unappealingly, greased.

Well, OK.It’s not really the history of the world, but 10,000 BC has eye candyand action. And now, when someone asks “did extraterrestrialsbuild the pyramids?” I can disabuse them of that nutty idea: “Don’t besilly. They were built by a bunch of non-union, wooly mammoths.” Works for me.