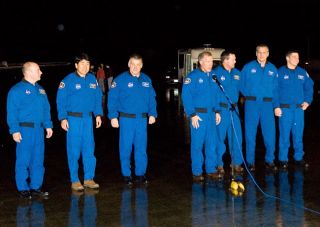 "Thankyou all for … welcoming us here in this wonderful weather we've got,"Gorie said. "I think when we get the weather done with here today, we'regoing to have a nice shot at launching."

Delayingthe crew's arrival helped the astronauts avoid flying through most of thesevere weather during a short journey from Johnson Space Center in Houston, NASA spokespeople at KSC said. The band of storms generated more than 10 tornadoesFriday, according to National Weather Service reports, injuring dozens andreportedly killing one.

In spite ofthe delay, NASA spokespeople said the change of plans should not interfere withthe crew's 2:28 a.m. EST (0628 GMT) launch toward the space station on March 11.A glitch with one of Endeavour's UHF radios, used to communicate during launchand landing, is also notexpected to interfere with mission plans because two backups exist, missionmanagers said Friday morning.

Mission specialist Takao Doi,the Japan Aerospace Exploration Agency's astronaut, also stepped onto the floodedtarmac to before members of the press.

The STS-123crew is slated to add a new Japanese pressurized module and a two-armedrobot named Dextre to the space station, as well as deliver and test asuite of experiments on orbit during five planned spacewalks.

Endeavour'santicipated Tuesday launch will be as NASA's second of six space shuttlemissions planned for 2008 — three more than the agency successfully launchedlast year. Scheduled to last at least 16 days, the mission will also be the longestever attempted during a space station construction flight.

"We'vegot a very, very ambitious flight schedule," Gorie said, "but with agreat orbiter waiting for us and this great crew, we're going to have a greatmission."