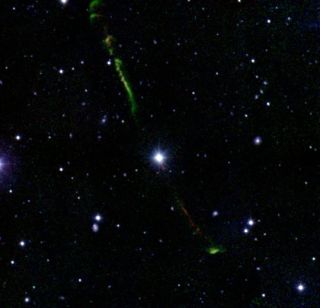 Two oldstars appear to be gearing up for a second generation of planet formation, aphenomenon astronomers say they have never seen before.

"Thisis a new class of stars, ones that display conditions now ripe for formation ofa second generation of planets, long, long after the stars themselvesformed," said UCLA astronomy graduate student Carl Melis, who reported thefindings at a recent meeting of the American Astronomical Society in Austin,Texas.

The starsare BP Piscium in the constellation Pisces and TYCHO 4144 329 2, which residesin the constellation Ursa Major. The exact ages of the stars are unknown, butit is estimated they are at least hundreds of millions or possibly billions ofyears old, and might have already given birth to planets long ago.

"Mostastronomers now believe that most stars are accompanied by first-generationplanets of some sort, even if the planets are not massive enough to be pickedup by the radial velocity [detection] technique," Melis said.

The unusualthing about these stars is that they appear to be giving birth to planetsagain.

"Wecurrently understand planet formation to occur around stars when they are veryyoung and enshrouded in dusty and gaseous disks, the material necessary to formplanetary bodies," Melis told SPACE.com. "This material iscompletely used up after a couple to ten million years after the star is bornand is not replenished during the star's life. As such, we would never expect astar to undergo planet formation late in its life as the necessary conditionsare not present."

How theycan do this is still unclear, but the stars seem to have kept many of theiryouthful qualities. For instance, the researchers found orbiting disks of gasand dust extended around the stars, and, in the case of BP Piscium, jets of gasbeing ejected into space. These gas-and-dust rings provide the fodder for themaking of planetesimals, such as cometsand asteroids that can merge to form larger bodies, along with planets.

"Withall these characteristics that match so closely with young stars, we wouldexpect that our two stars would also be young," Melis said. "As wegathered more data, however, things just did not add up."

The lack oflithium gave away the true stellar ages. Since starsburn lithium as they get older, younger stars should pack large stores of thechemical element. The astronomers found, however, that BP Piscium containedmuch less lithium than would be expected for a young star of its mass.

"Thereis no known way to account for this small amount of lithium if BP Piscium is ayoung star," Melis said. "Rather, lithium has been heavily processed,as appropriate for old stars. Other spectral measurements also indicate it is amuch older star."

Theresearchers speculate that the senior stars might be borrowing material fromtheir neighbors to construct new worlds.

"Ourteam believes that these stars, as they aged and began to expand into giantstars, engulfed very short-period companion stars orbiting around them,"Melis said. "Interactions with these companions caused matter to be flunginto disks surrounding the two stars."