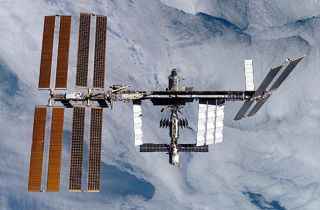 A view from the space shuttle Discovery shortly after it departed the International Space Station on Nov. 5, 2007. On its STS-120 mission, Discovery left behind a bus-sized room for the orbital laboratory and a replacement for one of the Expedition 16 crew.
(Image: © NASA)

It's been abusy year for spaceflight in the U.S. and around the world, with an even moreambitious slate ahead for 2008.

On the homefront, NASA launchedthree shuttle missions to the International Space Station (ISS), whereastronauts laid the framework for new European and Japanese laboratories set tofly next year even as they uncovered new glitches with the outpost's solararrays.

?I thinkthat we have accomplished a lot post-Columbia, and that this last year has beenour proving ground,? said the space station's current commander Peggy Whitson,the first female ISS skipper, this month.

Malaysia?sfirst astronaut and a record space tourist flight also launched toward the ISSin 2007, which saw a myriad of science probes rocket spaceward while the SpaceAge turned 50. China and Japan also made great strides this year, launchingtheir first moon probes as both countries prepare to send crewed spacecraftinto orbit next year.

While afreak hail storm in February delayed the start of NASA?s shuttle flight planfor months, the U.S. agency bounced back to complete three missions that addednew solar arrays, truss segments and the Harmony connecting room to the ISS.

?Obviously,it hasn?t gone along flawlessly, but that?s part of the process too,? saidWhitson, adding that only by tackling such challenges will humanity learn howto better explore space.

Theconstruction work culminated in a November marathon of spacewalks and robotics byWhitson and her crewmates to ready their station for a fourth shuttle flight—sincedelayed—bearing Europe?s Columbus laboratory. Columbus will dock at thestation?s Harmony node, the first new room to arrive at the ISS since 2001.

?Theactivity we just did on [the] station is probably the most complicated assemblywe have ever done,? said William Gerstenmaier, NASA?s associate administratorfor space operations. ?And all that has worked precisely as we needed it towork.?

NASA plansup to 12 more shuttle flights to complete ISS construction, plus one more tothe Hubble Space Telescope, before its three-orbiter fleet retires in 2010. Sixshuttle flights are currently on NASA?s docket for 2008.

?I thinkwe?ve got easily the capability to go fly the four flights a year that we needto do to complete our manifest,? Gerstenmaier said.

China began this year with a bang,literally, when it destroyed a defunct communications platform during a Januaryanti-satellitetest that spurred widespread criticism from countries around the world.

?Theyreally do seem to have been caught off guard,? said China space specialist DeanCheng, a senior Asia analyst with CNA Corp. in Arlington, Va., of the country?ssurprise from the protests. ?And the damage control efforts that they?veundertaken have, frankly, been poor.?

But thetest kicked off a busy launch period for China and Japan capped by the nearlaunches of separate lunar orbiters—Chang?e 1 and Kaguya, respectively—toexplore the surface of the moon. The year also saw Malaysia?s first astronaut launchto the ISS aboard a Russian spacecraft and return during a harrowing ballisticdescent with two professional cosmonauts.

?This was,in a sense, the first wave of Asia?s jump into space,? Cheng said of 2007.?This is not a high-impact, pedal-to-the-metal kind of race.?

Unlike theSpace Race between the U.S. and former Soviet Union, the internationalcompetition for space prowess in Asia reaches past national prestige, he added.

?TheChinese are still, for better or worse, head and shoulders above the restsimply because they?re putting up their own astronauts up on their ownvehicle,? Cheng said.

China is the third country, after Russia and the U.S., to build and launch spacecraft capable of carrying astronauts into orbit.

South Korea?s first astronaut is slated tolaunch to the space station atop a Russian rocket in 2008 after, if all goeswell, Japanese astronauts visit the ISS to help install segments of theircountry?s massiveKibo laboratory. When fully assembled, Kibo will be the largest single labattached to the ISS.

Meanwhile, China is gearing up to launch its third manned spaceflight, with three astronauts and aplanned spacewalk, in fall 2008.

?Thesecountries are competing with each other to say, ?We are a first world, firstrate, aerospace and scientifically advanced country,?? Cheng said. ?Take usseriously, invest in us, hire our people, all of those factors. And I think inthe next several years you're going to see an even higher growth rate."

NASA isbanking on advances in commercial spaceflight to help bridge the anticipatedyears-long gap between the space shuttle fleet?s retirement and the firstflights of its replacement—the Orion Crew Exploration Vehicle.

The U.S. space agency completed awarding contracts for the spacecraft?s Ares I rocket among othermilestones, with the first abort test flights planned for 2008.

"[I]t'sbeen an important year for us," Whitson said. "And I'd like to thinkthat it's been very successful."