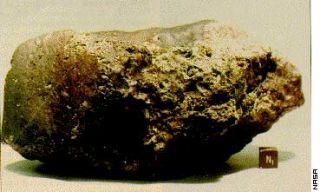 Infamous Mars rock purported to carry signs of Martian biology. Years later, debate continues to swirl around meteorite ALH84001 and whether or not biological processes in the rock of ages are truly evident.

Nobody knows for sure how life formed in the first place, but the thinking is that first you had to have the building blocks—organic compounds containing carbon and hydrogen.

A new study finds these building blocks could have formed very early in the history of Mars.

The research says nothing about whether there is life on Mars, but it does indicate that the raw material for life should be easy to drum up on any cold, rocky world.

The research was two-pronged:

First, scientists re-examined the well-studied and highly controversial meteorite known as Allan Hills 84001. It's a rock from Mars that long ago was flung from that planet by an impact and fortuitously landed on Earth. It's been said by some scientists to contain direct signs of life on Mars, but that conclusion has been hotly debated for years.

Second, scientists looked at terrestrial rocks from Svalbard, Norway. The Svalbard rocks were created by volcanic eruptions in a freezing Arctic climate about a million years ago. The conditions are thought to be similar to ancient Mars.

Here's what they found:

"Organic material occurs within tiny spheres of carbonate minerals in both the Martian and Earth rocks," said study leader Andrew Steele at the Carnegie Institution's Geophysical Laboratory. "We found that the organic material is closely associated with the iron oxide mineral magnetite, which is the key to understanding how these compounds formed."

Here's how it apparently happened:

As the rocks cooled, magnetite acted as a catalyst to form organic compounds from fluids rich in carbon dioxide and water. In the Mars meteorite, the organic material did not originate from Martian life forms but formed directly from these chemical reactions within the rock, Steele and his colleagues figure.

This is the first study to show that Mars is capable of forming organic compounds at all, the researchers said in a statement today. The research is published in Meteoritics & Planetary Science.

"The results of this study show that volcanic activity in a freezing climate can produce organic compounds," said study co-author Hans E.F. Amundsen from Earth and Planetary Exploration Services, a private company. "This implies that building blocks of life can form on cold rocky planets throughout the universe."

The finding sets the stage for NASA's Mars Science Laboratory (MSL) mission in 2009, said Steele, a team member for the Sample Analysis on Mars (SAM) instrument onboard MSL. "We now know that Mars can produce organic compounds. Part of the mission's goal is to identify organic compounds, their sources, and to detect molecules relevant to life. We know that they are there. We just have to find them."