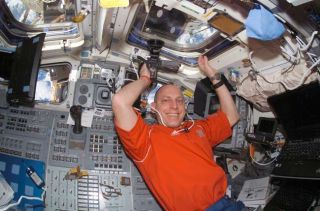 A NASA astronautis settling back into life on Earth after a five-month trek to theInternational Space Station (ISS).

U.S. spaceflyerClayton Anderson worked in Earth orbit for about 153 days while serving on twoISS crews during his long-duration spaceflight. He has spent the last few weeksundergoing physical rehabilitation to rebuild muscle mass after months of floatingin microgravity.

"Ifeel really good," Anderson told SPACE.com Thursday. "I'mstarting to run a little bit and my muscles are coming back. I haven't walkedinto a wall in over two weeks, so everything is going well."

Anderson,48, launched toward the ISS on June 8 during NASA's STS-117 shuttle flight andjoined the station's Expedition 15 crew. He stayed aboard the ISS in October tojoin the newly arrived Expedition 16 crew. The spaceflyer returned to Earthaboard NASA's shuttle Discovery on Nov. 7 during the STS-120mission.

Thespaceflight marked the first of Anderson's NASA career, which began almost 25years ago when he signed on at the agency's Johnson Space Center (JSC) inHouston in early 1983. After 15 attempts, he was selected to join NASA'sastronaut corps in 1998.

"I wasin space only because of the people here at JSC who helped to shape me and makewho I am throughout those 25 years," Anderson said. "It's an honorand a privilege to be up there and represent them and the things that they'redoing."

Andersonperformed three spacewalks to support ISS construction and worked alongside NASA'svisiting STS-117, STS-118 and STS-120 shuttle crews during his spaceflight. Thestation received a pair of new solar arrays, a vital connecting module and weatheredcomputer glitches, a ripped solar wing and other hurdles during the threeshuttle missions.

"So Ithink they wanted to get me back onto the ground so some of that would stop,and it looks like it may have worked," joked Anderson.

A nativeAshland, Nebraska, Anderson is his home state's first astronaut to fly and wasknown for his sense of humor in orbit. On Halloween, he donned a black cape todress up as a space vampire and held daily trivia contests with Mission Control.

Aside fromreadapting to Earth's gravity and rebuilding lost muscle mass, Anderson saidthere are other challenges to returning to life on his home planet.

"Thehardest part is, I couldn't remember any of my passwords or how to operate myTV or my phone, so my son had to show me all that stuff," Anderson said,adding that he is readjusting to life with his family close by aftermonths communicating solely by video conference and telephone.

He also enjoyed returninghome in time for Thanksgiving to celebrate the U.S. holiday with his wife Susan,son Cole and daughter Sutton Marie.

"I wasso tired of smoked turkey and dressing and a tortilla in space that, to havethe real thing and be there with my family was an incredibly wonderfulday," Anderson said.