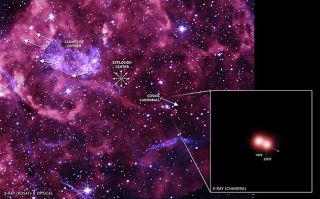 One of thefastest moving stars ever seen is challenging theories to explain itsblistering speed.

The cosmiccannonball, a neutron star known as RX J0822-4300, was discovered with NASA'sChandra X-ray Observatory.

Astronomersused five years of Chandra observations to show that therogue star is careening away from the Puppis A supernova remnant, leftoversof a star that exploded about 3,700 years ago. The neutron star is racing out ofour Milky Way Galaxy at about 3 million mph (4.8 million kph).

"Justafter it was born, this neutron star got a one-way ticket out of the galaxy,"said co-author Robert Petre, an astronomer at NASA's Goddard Space FlightCenter in Greenbelt, Md. "Astronomers have seen otherstars being flung out of the Milky Way, but few as fast as this."

Otherhypervelocity stars known to be exiting the Milky Way move at speeds about one-thirdas great—likely shot toward interstellar space by an aggressive, supermassiveblack hole at our galaxy's center.

In the caseof RX J0822-4300, however, a tremendous lopsided supernova explosion rocketed theneutron star to its blinding speed. It has traveled 20light-years thus far, and will take millions of years to escape theclutches of the Milky Way.

Despiteusing advanced computer models to simulate how such a stellar rocket couldform, astronomers are at a loss of words.

"Theproblem with discovering this cosmic cannonball is we aren't sure how to makethe cannon powerful enough." said Frank Winkler, an astronomer at Middlebury College in Vermont. "The high speed might be explained by an unusuallyenergetic explosion, but the models are complicated and hard to apply to realexplosions."

Winkler andPetre's research is detailed in a recent issue of the Astrophysical Journal.