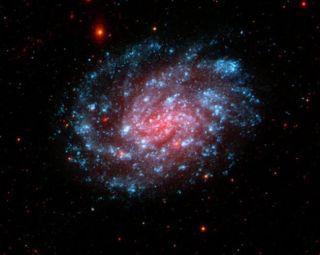 A classic spiral galaxy with open arms and vigorous star formation, the young galaxy NGC 300 is located about seven million light-years away in the constellation Sculptor. Image is from NASA's Galaxy Evolution Explorer.
(Image: © NASA/JPL-Caltech/Las Campanas)

In theearly 1900s Edwin Hubble discovered that the MilkyWay galaxy is not alone. Our galaxy is just one of many ?islanduniverses,? as Hubble dubbed them, swimming in the vast sea of space.

Now thatastronomers can measure the age of each galaxy, its star-making activity andother related data, they are piecing together an understanding that galaxiesgrow gradually like children, gliding through their visibly different teenyears before reaching adulthood.

Results beingpublished in a December issue of the Astrophysical Journal provide thestrongest evidence yet for this thinking, called nurture theory, in which theelegant spirals (young galaxies) and blob-like ellipticals (old galaxies) areevolutionarily linked.

Scientistshave long thought that young galaxies grow up into old ones, referred to asblue and red galaxies, respectively. The color indicates how actively thegalaxy is churning out new stars. Younger stars shine in ultraviolet or bluelight, and so galaxies bustling with star-making activity appear blue. Olderstars emit infrared or red light. In aging galaxies, their ?stellarreproductive? capacity has begun to shut down and so the remaining starsare just hanging out for the remainder of their lives.

About halfof all galaxies are blue and half are red. It had been postulated that the twoare linked, with the blue young'uns running out of star-making material andmaturing into passive red galaxies.

If thistheory holds true, you'd expect to see a population of ?teenage?galaxies in the process of transitioning from young to old. Finding these teensis tricky though, because the cosmic change occurs over billions of years.

Data fromGALEX, launched in 2003, allowed Martin and his colleagues to observe galaxiesin ultraviolet light across 10 billion years of cosmichistory. The researchers' analysis of tens of thousands of images taken byGALEX has revealed that young, spiral galaxies do in fact first mature into?teens? before winding down into their elderly ellipses.

The detailsof the picture now emerging suggest that a spiral galaxy might merge withanother spiral or perhaps an irregularly shaped galaxy before churning out afew bursts of newly minted stars. Eventually, the galaxy begins to exhaust itsstar production and settles into later life as an elliptical.

The findingsalso suggest that some young galaxies waltz into old age quickly, while others leisurelystroll into their golden years.