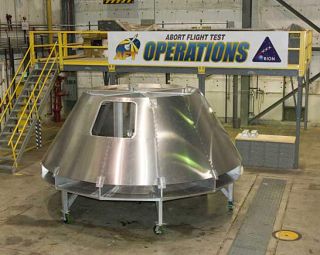 NASA brokeground Wednesday on a new launch pad that will host the first escape systemtests for the agency’s Orion capsule, the successor to the U.S. spaceshuttle.

Based atthe U.S. Army’s White Sands Missile Range in New Mexico, the new pad willhost a series of tests for Orion’s launch abort system - a rocket-poweredescape tower designed to wrench a crewed capsule free from its Ares I boosterin an emergency. The first test, Pad Abort-1, is set for Sept. 23, 2008.

“Thelaunch abort system actually has to operate in a wide variety of differentenvironmental conditions,” said Mark Kirasich, NASA’s deputymanager for the Orion project, in a recent briefing. “It has to be ableto pull the crew away for us while we’re sitting on the pad, essentiallyfrom a zero start, and through powered, first-stage flight, and up to very highaltitude.”

The Orionspacecraft and their Ares I rockets are slated to begin the first crewedtest flights as early as September 2013, about three years after the finalplanned flight of NASA’s space shuttles.

“Theflight tests are when we actually start putting the pieces together that getpeople into space,” said Mark Geyer, NASA’s deputy manager of theConstellation program overseeing Orion and Ares.

NASA plansto retire its three-shuttle fleet, which has been in operationsince 1981, in September 2010 after completing construction of theInternational Space Station (ISS). The agency will then rely on its Orioncapsules, their Ares I boosters and a new heavy-lift Ares V launcher to sendastronauts and cargo to the ISS and, ultimately, the moon.

But first,the agency plans to launch an ambitious series of at least 10 test flights,five of them from the new White Sands site, to qualify the Orion-Ares I systemfor the first planned operational mission to the ISS in September 2014.

“Aslong as things go relatively well, we can make it,” Geyer said of thetightly packed test schedule. “If we do find something that we need tostep back and look carefully on, we will move the launch date, and the launchdates of the subsequent [tests], to make sure that these vehicles are safe tofly.”

The Orionlaunch abort system consists of a mast-like tower that carries a set of threerocket motors, the largest of which is reserved for emergencies to separate an Orioncapsule from its rocket and pull its astronaut to safety. The two smallermotors are designed to jettison the escape tower after a successful liftoff andaid in attitude control, Kirasich said.

In additionto a pair of pad abort tests, which test Orion’s ability to pull its crewcapsule to safety from the launch pad, a trio of in-flight trials is scheduledbetween 2009 and 2011 to measure the escape system’s effectiveness atsubsonic and supersonic speeds, as well as during a tumbling motion. A high-altitudetest during the second Ares I launch, slated to fly in 2012 from NASA’sKennedy Space Center in Cape Canaveral, Fla., will check the escape system atthe upper limit of its design, the space agency said.

Kirasichsaid one of the major challenges his team has tackled has been culling about5,000 pounds (2,267 kilograms) from the Orion spacecraft to lighten its load.Meanwhile, a series of other technology checks are underway to test Orionparachutes and the shuttle-derived solid rocket booster of Ares I’s firststage.

At theKennedy Space Center, work crews are driving in the piles to build lightingprotection system towers around Launch Pad 39B, the staging ground for futureAres rocket launches, NASA officials said.

“Weactually had some power lines and telephone lines running right across the areawhere we’re going to put the launch pad,” he said. “So we hadto take all that down.”