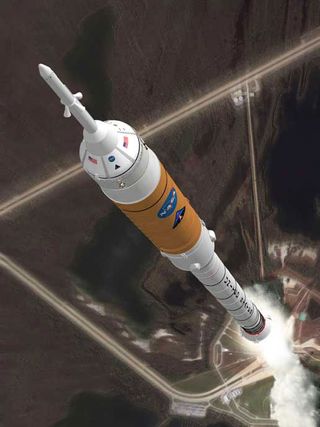 CAPECANAVERAL, Fla. - There are only about 16 flights left before NASA?s space shuttlefleet retires in 2010, but an ambitious plan is in place to have a replacementspacecraft ready by 2013.

This is twoyears earlier than NASA?s previously stated goal of getting the next generationOrion CrewExploration Vehicle and the Ares I and Ares V rockets ready by 2015.

?There is atwo-thirds statistical likelihood of being successful in meeting that [2015]date, but our plan is much more aggressive than that,? said Jeff Hanley,program manager for NASA?s Constellation program. ?We?re trying to get the[initial operating capabilities] by as early as 2013.?

Hanley saidthe year-old Constellation program is currently in the formulation phase andtrying to secure parts for the new spacecraft. A testflight of an Ares I rocket could begin as early as 2009, with a pilotedtest to follow as soon as 2013, Hanley said.

?At the endof this year, we will have all the major elements under contract to build therocket and the spacecraft to take us back into low-Earth orbit and our firststeps back toward the Moon,? said Scott Horowitz, NASA?s associateadministrator for exploration systems.

The Aresrockets will contain features from both the current shuttle and the old Saturnrockets that carried the Apollo astronauts to the Moon. Ares I is a two-stagerocket designed to loft NASA?s new capsule-based vehicle, Orion, into orbit.Its larger, cargo-only counterpart is Ares V, which will be the most powerfulrocket ever built and capable of carrying five to six times more payload thanthe shuttle.

Orion willreplace the shuttle as NASA?s vehicle to ferry astronauts to the InternationalSpace Station, and it will also be the vehicle the agency plans to use toreturn to the Moon in 2020.

NASA plansto launch at least 13 shuttle flights dedicated to ISS construction through2010, with the option of two additional logistics missions if feasible. A finalmission to service the Hubble Space Telescope is also slated to launch inSeptember 2008.?