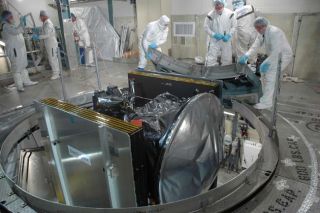 Launch pad workers prepare the Dawn spacecraft for its attachment to a Delta 2 rocket. The probe is set to launch in September 2007 to visit the asteroids Vesta and Ceres.
(Image: © NASA/Jim Grossman)

Theasteroid belt's largest bodies have drifted virtually alone since theircreation about 4.5 billion years ago, but each will soon receive a visit fromNASA's Dawn spacecraft.

Missionscientists hope to use Dawn'sobservations of the dwarf planet Ceres and asteroid Vesta to investigatethe solar system's structure and evolution, as well as shed new light on secretsof planet formation.

"Wetruly are going back in time, back to the dawn of the solar system," saidDavid Lindstrom, NASA's Dawnprogram scientist at theagency's Washington, D.C., headquarters, during a July mission briefing.

Dawn is setto rocket into space from Florida's Cape Canaveral Air Force Station on Thursday at 7:20 a.m. EDT(1120 GMT) aboard a Delta 2 booster. The launch will send the 2,685-pound(1,218-kilogram) Dawn spacecraft onan eight-year journey to the asteroid-rich zone between Mars and Jupiter.

Its launchwas scheduled for Wednesday, but bad weather prevented crews from fueling the second stage of theprobe's Delta 2rocket on Sunday, prompting the 24-hour delay. Delays launching Dawn's $449 million missionearlier this summer were expected to add about $25 million to the probe's totalcost, mission managers have said.

Together,Ceres and Vesta make up more than a third of the asteroid belt's mass. During Dawn's total 3-billion-mile(4.9-billion-kilometer) trip, it will make an orbital pit stop at each of the tworocky bodies before the mission ends in July 2015.

Thespacecraft's first visit is set for August 2011, when it will park itselfaround Vesta--an oblong asteroid 330 miles (530 kilometers) in diameter thathides an iron core beneath its rocky surface. The spacecraft will graduallyscan the dry rock's exterior during a 10-month visit, helping scientists toinvestigate how planets like Mars might have looked early in theirformation.

"It'ssort of like an archaeological trip where we're going to the ruins of anancient civilization," said Chris Russell, Dawn's principal investigatorat the University of California, Los Angeles.

Once Dawnhas fully scoped out the arid asteroid, it will put its lightweight ion drivein full gear to reach the Ceres, a Texas-sized dwarf planet roughly 585 miles(942 kilometers) indiameter, by February 2015.

Based onobservations made by the Hubble Space Telescope, astronomers think Ceres may harbor notonly a thin atmosphere, but also a thick layer of water ice beneath itssurface. If true, Ceres may boast nearly six times as much fresh water than isfound on Earth.

"If wediscover evidence of a subsurface ocean, than certainly it would be a highpriority to go back and explore in more detail," said Mark Sykes, a Dawnco-investigator at the Planetary Science Institute in Tucson, Ariz.

In additionto providing for life on Earth, astronomers think such sources of water couldhave played integral roles in planet formation.

The opticalcamera will create detailed maps of each body down to 230 feet (70 meters) per pixel for Vesta and 410 feet (125 meters) perpixel for Ceres. Working in less detail, Dawn's mapping spectrometer will scaneach object's surface for patches of minerals.

The GRaNDinstrument will use celestial radiation to deduce the basic elements present inboth Ceres and Vesta. If the instrument can peer deep enough below Ceres'surface, signs of frozen or liquid water may be detected.

NASA firstapproved the Dawn mission in 2001, but the program has since sufferedcancellations, postponements and several launch delays. Attempts to launch the probe in July went withoutsuccess due to bad weather, rocket booster glitches and difficulties arrangingtracking aircraft and ships to monitor the planned liftoff.

Technical and financial woes promptedNASA to order the mission to stand in October 2005 and ultimately scrap theflight in March 2006. But a reevaluation of the Dawn mission's difficulties bythe space agency ledto its reinstatement a few weeks after its cancellation.

In spite ofrecent accidental damage to the spacecraft's solar panel array and severaldelays this year, mission managers are confident Dawn will successfully beginits journey on Thursday.Should mission managers delay the probe's launch again, they will have untillate October to send Dawn spaceward; otherwise, the first launch opportunity tovisit both Ceres and Vesta won't open again until about 2022.