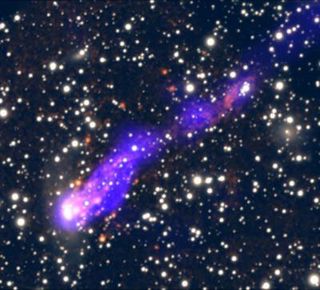 This composite image shows a tail that has been created as a galaxy plunges into the galaxy cluster Abell 3627. X-rays from Chandra (blue) and optical light (white and red) from the SOAR telescope show that as the galaxy plummets, it sheds material and forming stars behind it in a tail that stretches over 200,000 light years long. This demonstrates that stars can form well outside of their parent galaxy.
(Image: © NASA/CXC/MSU/M. Sun et al.)

Orphaned stars are being bornin a vast tail of material stretching behind a faraway galaxy, astronomers saidtoday.

The finding is evidence thatorphaned stars?those not orbiting the center of a galaxy in normal fashion?aremuch more common than thought.

The feature extends for morethan 200,000 light-years and was created as gas was stripped from the galaxy.For comparison, our solar system is about 26,000 light-years from the centerof the Milky Way, and we're said to be in the galactic outskirts.

"This is one of thelongest tails like this we have ever seen," said Ming Sun of MichiganState University, who led the study. "And, it turns out that this is agiant wake of creation, not of destruction."

The comet-like tail wasobserved in X-ray light with NASA's Chandra X-ray Observatory and in opticallight with the Southern Astrophysical Research (SOAR) telescope in Chile.

The observations indicate thatthe gas in the tail has formed millions of stars.Because the large amounts of gas and dust needed to form stars are typicallyfound only within galaxies, astronomers had thought it unlikely that largenumbers of stars would form outside a galaxy.

"This isn't the firsttime that stars have been seen to form between galaxies,"said team member Megan Donahue, also of MSU. "But the number of starsforming here is unprecedented."

The parent galaxy, called ESO137-001, is about 220 million light-years from Earth. It is plunging toward thecenter of Abell 3627, a giant clusterof galaxies.

The evidence for starformation in the galaxy's tail includes 29 regions of ionized hydrogen glowingin optical light, thought to be from newly formed stars. X-rays emanating fromtwo of these regions also suggest starbirth.

The researchers believe theorphan stars formed within the last 10 million years or so. Our sun, forcomparison, is about 4.6 billion years old.

The stars in the tail of thisfast-moving galaxy would be much more isolated than the vast majority of starsin galaxies.

"By our galacticstandards, these are extremely lonely stars," said Mark Voit, another teammember from MSU. "If life was to form out there on a planet a few billionyears from now, they would have very dark skies."