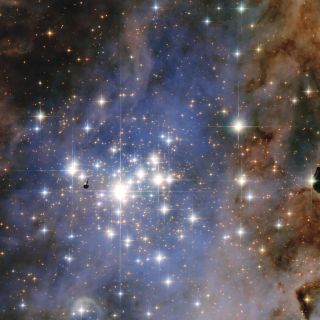 What does a star feel like? A team of scientists put astronomy on a vibrating sound stage in order to tackle such questions.

The result is a presentation about the "Vibrating Universe," which was developed in order to make astronomy more accessible for people who are deaf by converting scientific phenomena into vibrations.

"For our workshop we decided to focus on astronomy — a gateway to science — because of the breathtaking imagery it offers, the big questions it tackles, and its increasingly interdisciplinary nature," Mario De Leo-Winkler, a lead on the project and director of the National System of Researchers of Mexico, said in a statement. "We used storytelling, videos, and images in the workshop to bring meaning to the sounds of the universe."

De Leo-Winkler worked with astronomers at the University of California, Riverside, and teachers at the California School for the Deaf, Riverside — a public school for deaf students — to design a program for use on sound stages, which are special facilities where the wooden floor vibrates in a specialized way as sounds play.

Paired with slides and a presentation conducted in American Sign Language, the "Vibrating Universe" brings the students on a tour of the universe, from terrestrial phenomena like auroras and rocket launches to cosmic experiences like the sun's roiling surface and the particles bouncing around Saturn's rings.

Next, the team wants to tackle the universe through another sense — smell.