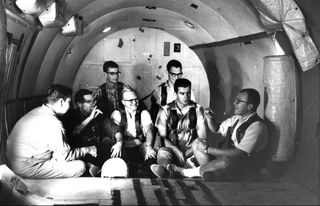 Deaf participants in NASA's and the U.S. Naval School of Aviation Medicine's joint weightlessness research program sit in a zero-g aircraft that flew out of Naval Air Station in Pensacola, Florida. The program ran from 1958 to 1968.
(Image: © U.S. Navy/Gallaudet University collection)

A new museum exhibit honors 11 men who made significant contributions to spaceflight in NASA's early days.

In the late 1950s, NASA recruited 11 deaf men from Gallaudet College (now Gallaudet University) to study the long-term effects of weightlessness on the human body before the agency ultimately sent astronauts to space.

The group of men, also known as the "Gallaudet 11," suffered from inner-ear problems. As a result, they did not experience the adverse effects of motion sickness, making them the perfect candidates for early spaceflight experiments, according to a statement from NASA.

Now, Gallaudet University, which focuses on education opportunities for deaf and hard-of-hearing students, is honoring the 11 men for their contributions to the NASA spaceflight program with a new museum exhibit, called Deaf Difference + Space Survival. The exhibit spotlights the "relatively unknown contributions to the study of motion sickness" made by the Gallaudet 11, NASA officials said in the statement. [Fun in Zero-G: Weightless Photos from Earth and Space]

"Throughout a decade of various experiments, researchers measured the volunteers' non-reaction to motion sickness on both a physiological and psychological level, relying on the 11 men to report in detail their sensations and changes in perception," NASA officials said in the statement.

From 1958 to 1968, the men participated in various weightlessness, balance and motion-sickness experiments that helped NASA scientists better understand how the human body responds to foreign gravitational environments. For one of the experiments, four men spent 12 straight days inside a slow-rotation room to test the effects of gravitational changes on the human body. Other experiments included zero-gravity flights in the "Vomit Comet" (an airplane that simulates the feeling of weightlessness that astronauts experience in space) and ferry rides on choppy seas off the coast of Nova Scotia, according to the statement.

"These experiments help to improve understanding of how the body's sensory systems work when the usual gravitational cues from the inner ear aren't available, as is the case of these young men and in spaceflight," NASA officials said in the statement.