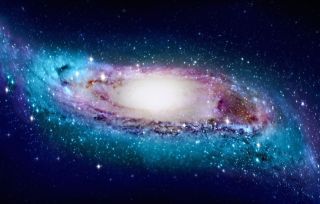 An illustration of the true shape of the Milky Way, with an S-like warp in the outer reaches of the disk.
(Image: © CHEN Xiaodian)

The Milky Way's shape is a disk … with a twist.

New research finds that at the edges of the galaxy, where the pull of gravity weakens, the shape of the Milky Way warps. Instead of lying in a flat plane, the galaxy takes on a bit of a twisted "S" shape.

"This new morphology provides a crucial updated map for studies of our galaxy's stellar motions and the origins of the Milky Way's disk," study co-author Licai Deng, a senior researcher at the National Astronomical Observatories of the Chinese Academy of Sciences, said in a statement. [11 Fascinating Facts About Our Milky Way Galaxy]

At the center of the Milky Way is a supermassive black hole, surrounded by billions of stars and invisible "dark matter," which can't be seen directly but exerts a gravitational pull that helps keep the galaxy intact. The outer reaches of the galaxy are difficult to image, given that the Milky Way is 100,000 light-years, or 0.5 quintillion miles (1 quintillion kilometers), across.

Deng and his colleagues used a special category of stars called the classical Cepheid stars to measure the distances at the edge of the galaxy. These stars are as much as 100,000 times brighter than Earth's sun and up to 20 times larger. They burn bright and die young, running out of fuel within several million years after formation.

The light of these short-lived stars changes regularly, in day- to month-long cycles. Using these pulses in brightness, scientists can detect the distance of these stars within 3 percent to 5 percent accuracy, study lead author Xiaodian Chen, a researcher at the National Astronomical Observatories, said in the statement.

The Chinese scientists recently published a new catalog] of these stars. Looking at 1,339 Cepheid stars from that catalog, the scientists discovered that their positions reveal a warping at the outer edges of the galaxy. The ends of the Milky Way bend like an S in a "progressively twisted spiral pattern," study co-author Richard de Grijs of Australia's Macquarie University said in the statement.

The Milky Way isn't alone. A dozen other galaxies had previously been shown to display similar warping, the researchers reported today (Feb. 4) in the journal Nature Astronomy. According to Chao Liu, a study co-author and researcher at the National Astronomical Observatories, the warping seems to be caused by torque induced by the rotation of the inner disk of the galaxy.