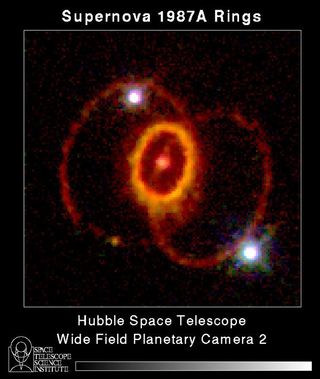 After stars explode, they leave a remnant that can be stunning. The supernova 1987a is among the most famous, because astronomers have watched it evolve since it exploded in 1987. Here, the Hubble Space Telescope captures the object's ring-like structures.
(Image: © NASA/Hubble)

Burning more brilliantly than a billion suns, the energy-packed star deaths known as supernovas have lately enabled scientists to discover fundamental properties of the universe.

Now physicists hope to uncover new cosmic secrets by recreating some supernova features in the lab.

The REsonator SOLenoid with Upscale Transmission (RESOLUT) joins a small number of facilities around the world able to recreate some of the emissions and reactions of nature's biggest fireworks display.

“We’re doing experiments that replicate, in a very controlled manner, the explosions that take place in stars,” said Ingo Wiedenhöver, a physicist at Florida State University, where RESOLUT is housed in a particle accelerator lab.

Recently, RESOLUT was used to create specific types of radioactive nuclei found in Type 1a supernovas.

Type 1a supernovas occur when a type of star known as a white dwarf reaches a critical mass and ignites carbon fusion near its center. The nuclear explosion spreads through the star in about one second and blasts the star's contents apart. The thermonuclear inferno leaves no remains behind.

Because all Type 1a supernovas release virtually the same amount of energy, the observed brightness of such an explosion varies only with its distance from Earth, and so can be used as a gauge for measuring interstellar distances.

"It is what astrophysicists call a 'standard candle' for mapping out distances," said Wiedenhöver. "At the same time they look at the observed redshift [which describes the supernova's velocity away from Earth] and measure the expansion of the universe."

Recent observations of ultra-distant supernovas suggest that the universe is expanding at an increased rate, which contradicts the steady-expansion viewpoint of famed astronomer Edwin Hubble. A better understanding of the reactions that take place within a supernova could help astrophysicists create a more accurate map of the universe.

"Not all Type 1a supernovae have exactly the same brightness," said Wiedenhöver. "Our effort is to make a model of brightness differences. To do this we need to understand the physics of the explosions."

The reactions themselves are not well-studied, mainly because the highly unstable isotopes containing the radioactive nuclei are not found on Earth.

"Astrophysicists tell us they need more information on the nuclear physics of these exotic isotopes," said Wiedenhöver. "This type of physics has really taken off in the last five years because of facilities like this one."

RESOLUT is not the only facility in North America using a beam of atomic particles to isolate rare nuclei in a particle accelerator, but it is unique in its flexibility. The TRIUMF Accelerator at the University of British Columbia and the ORELA facility at the Oak Ridge National Laboratory in Tennessee have, Wiedenhöver admits, "better beams, but we can select more freely which isotopes to study."

Nor are these experiments the first to mimic the calamity of deep space. In 2001, physicists experimenting with a type of matter called Bose-Einstein condensate managed to create a miniature explosion that in some ways resembled a supernova.