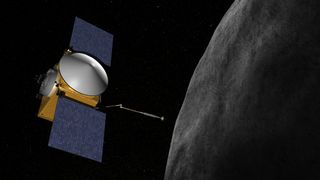 An artist's depiction of the OSIRIS-REx spacecraft at work around Bennu.
(Image: © NASA/Goddard/University of Arizona)

WASHINGTON — 2018 has been quite a year for spaceflight, but it's not over yet, and the OSIRIS-REx mission has one more major task to accomplish before the ball drops: slipping into orbit around the near-Earth asteroid Bennu.

The team will tackle that maneuver sometime on the afternoon of Dec. 31, but there's a lot to do before the feat can take place. Two tasks in particular will occupy the OSIRIS-REx team for the rest of the month: conducting a detailed survey of their asteroid target, and plotting precisely how the spacecraft will execute the orbital insertion.

"The navigation team's gonna check all their numbers, make sure that the maneuvers all work and then they're going to design the approach back to the asteroid," Dante Lauretta, principal investigator for OSIRIS-REx, told Space.com during the annual meeting of the American Geophysical Union. The team won't know precisely when the orbital insertion maneuver will take place until about 24 hours beforehand. [In the Clean Room: Up-Close Look at NASA's Asteroid-Sampling Probe OSIRIS-REx]

But before it enters orbit around the tiny body, the OSIRIS-REx spacecraft has an unusual amount of freedom in flight. "I call it like a hummingbird," Lauretta said. "When you're in microgravity, your concept of orbital dynamics goes out the door — you can change planes, you can leave orbit, you can re-enter orbit. You can do all these things that if you were in Mars orbit you would never be able to do."

The OSIRIS-REx team is taking advantage of that freedom by conducting a detailed survey of the asteroid. The spacecraft has made three close passes over the north pole of the space rock. On Sunday (Dec. 9), it turned toward the equator, and yesterday (Dec. 11), it settled into flight around that belt. Next, it will head down to the south pole.

All told, that tour will produce five estimates of Bennu's mass — a critical factor for establishing an orbital insertion trajectory — and the most detailed data to date about mineralogy in the region.

"The geology is phenomenal, it's been the greatest week of my career," Lauretta said. "We're all gathered around our monitors, we're pulling up the data, people are saying, 'Hey, look at this,' you come running over to see this feature that they've just looked at — so there's going to be a lot more of that going on for sure." Lauretta added that so far, the team has only looked at about 30 percent of the asteroid's surface in much detail.

While he's conscious of just how much work needs to get done between now and insertion, Lauretta said he's pleased with everything that's happened so far and excited for the Dec. 31 maneuver.

"The spacecraft is very well-behaved, so we're confident on everything we've seen so far that we'll be able to go with the nominal design," Lauretta said. "But again, they're going to triple-check it just to make sure we got everything right."