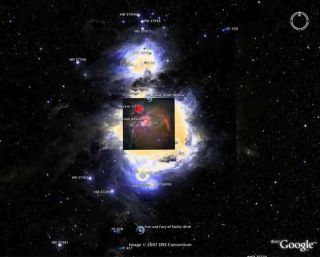 A close-up view of the Orion Nebula, with the Hubble image of the nebula overlaid, in Sky in Google Earth.
(Image: © ESA & Digitized Sky Survey (Caltech))

A new product from Google offers a virtual tour of the cosmos, showing off Hubble Space Telescope images set against starfield backgrounds made from other telescopes' photographs.

The download, "Sky in Google Earth," is free with the newest version of Google Earth. The cosmic tour adds to Google's mapping offerings that now include Earth, Mars and the moon.

The package includes 125 Hubble images with captions and links to news and background information. Other photos, showing large swaths of the sky and about a million objects total, come from the Digitized Sky Survey and the Sloan Digital Sky Survey.

A user can select specific objects, such as the famous Pillars of Creation, or from categories such as colliding galaxies. Constellations can also be perused, and they disappear as the user zooms in on an object.

Sky in Google Earth is produced by Google, through a partnership with the Space Telescope Science Institute, which operates Hubble for NASA and the European Space Agency.

Google's product enters a market with several competitors. Starry Night software has been around for 10 years and in recent months has taken many of its most popular features online. Variations of Starry Night are used to run planetarium shows, as educational tools in classrooms, and by professional and amateur astronomers to control telescopes. [Starry Night is published by Imaginova, parent company of SPACE.com.]