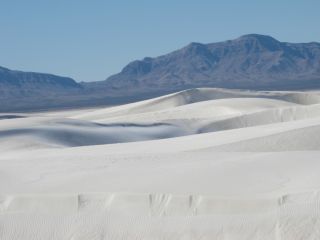 Until now, scientists didn't know for sure where most of the stuff around us came from. Now, they do.

Silica, or silicon dioxide (SiO2), is just about the most abundant thing here on the outer shell of Earth. It makes up most of the planet's crust by mass — about 60 percent, according to NASA. It's the main thing in sand at the beach. It's common in dirt and clay. It makes up most of the stuff in sandstone and quartz, and it's a critical ingredient in feldspar (a super common sort of rock). Granite has a lot of it. Humans mix it into cement and melt it into glass. It's also one of the more common molecules in the universe. And until recently, scientists had some good theories as to where it came from, but they weren't sure.

Now, according to NASA, they know: All this silica around us was born in supernovas that ripped apart "AGB stars" — a technical term for mid-sized stars not unlike our sun, but in the last millenia of their stellar lifetimes. (Unlike our sun, which isn't big enough to actually explode, these stars die in supernovas.) [Gorgeous Photos of Granite]

A team of NASA researchers published a paper in the journal Monthly Notices of the Royal Astronomical SocietyOct. 24 that revealed the results of observations of two clouds of matter left behind after AGB supernovas: Cassiopeia A and G54.1+0.3.

Astronomers study the chemical composition of faraway things by carefully parsing the wavelengths of light emitted by those objects. Water causes one pattern of wavelengths. Gold another. And silica yet another.

But the light from Cassiopeia A didn't quite match the expected pattern for grains of silica (sand, essentially) floating through space.. According to a NASA statement, lead study author Jeonghee Rho, an astronomer at the SETI Institute in Mountain View, California, figured out what was causing the mismatch. Existing models assumed that the space-bound silica grains would be spheres and would produce a wavelength pattern associated with a cloud of little spheres. But she built a new model in which the grains were closer in shape to little American footballs, and it matched the wavelengths incoming from Cassiopeia A.

A second supernova, G54.1+0.3, revealed the same pattern when the researchers looked for it.

The researchers still don't know precisely why the grains are football-shaped, or how exactly they formed. But they do know that they emerged during the hot outflow of matter from the supernova explosions, based on where they turned up in the resulting cloud. And the sheer quantity of them in these remnants suggests that when stars like our sun die, they collectively produce a good chunk — if not all — of the silica mass in the universe.

Editor's note: This story was corrected on Dec. 1 to reflect the actual future of our own sun, which will not detonate in a supernova.