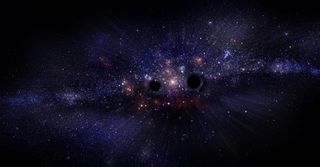 Bizarre, star-like objects that act like single, giant atoms may be hidden throughout the universe, and for the first time, researchers have shown how these strange quantum stars could form.

If these objects do exist, they could help explain dark matter, the unknown stuff that emits no light and yet makes up 27 percent of the universe. They could also be behind bright, fast bursts of cosmic radio waves that have confounded astronomers and even stoked thoughts of alien civilizations.

Unlike regular stars, these so-called axion stars (if they exist) do not shine. They're dark because they're made of hypothetical particles called axions, a primary candidate for dark matter. Different theories predict axions to have a wide range of masses, but overall, they're expected to be extremely light — perhaps as tiny as 10 raised to the 31st power times lighter than a proton. [Strange Quarks and Muons, Oh, My! Nature's Tiniest Particles Dissected]

Axions, if they do exist, would hardly interact with one another, but if gravity can coax them together, they could form a dense sphere with exotic properties unlike those of any other kind of star. That's because axions are bosons, a class of particles that includes particles of light, or photons.

In quantum physics, particles have discrete amounts of energy, meaning the particles exist at particular energy levels. With bosons, multiple particles can be at the same energy level simultaneously, unlike a different class of particle called fermions, which include electrons and protons. In an axion star — or, more generally, a boson star — every axion would be at the lowest energy level, meaning that the entire star would have the same quantum behavior, as if it were a single, giant particle.

Such an exotic object is also known as a Bose-Einstein condensate, a type of matter that physicists create in labs on Earth by cooling atoms to near absolute zero. In the lab, these condensates can also form superfluids, which flow without friction.

Previously, some physicists said that the gravity between the featherweight axions would be too weak to corral the particles into a star, said study co-author Dmitry Levkov, a physicist at the Institute for Nuclear Research of the Russian Academy of Sciences.

Star formation in no time

But new computer simulations, described on Oct. 12 in the journal Physical Review Letters, suggest that axion stars could indeed form quite readily, depending on the mass of the axion. For one relatively heavy axion, called a QCD axion, it might take 1 billion years for an axion star to form. (The QCD axion is a favorite candidate for dark matter among some physicists, because it could also solve a mystery related to the strong force, which holds atomic nuclei together.)

For an extremely light axion — about 100 quadrillion times lighter than the QCD axion and dubbed "fuzzy dark matter" — it could take just 10 million years to build an axion star, Levkov told Live Science.

"It's really interesting that just gravity can help you form Bose-Einstein condensates if given enough time — and that time is less than the age of the universe," Bhupal Dev, a physicist at Washington University in St. Louis who wasn't involved in the research, told Live Science.

Previous simulations started with smaller chunks of axion Bose-Einstein condensates, which then attracted one another via gravity to form axion stars, Levkov said. But in the new simulations, the researchers started with nothing but a gas of axions, and they found that a star formed all on its own. "We were very excited when we saw the Bose-Einstein star," Levkov said. Over time, such a star could continue to accumulate axions and grow.

"It's nice work," said Sebastian Baum, a physicist at Stockholm University in Sweden who wasn't part of the study. "It's an important stepping stone in understanding the story of such objects and, in general, axion dark matter."

If much of the dark matter is contained in these stars, Baum told Live Science, then axions could be rarer elsewhere — and thus harder to find on Earth using detectors like the Axion Dark Matter Experiment at the University of Washington in Seattle.

Axion stars could also produce detectable signals themselves. Axions can decay into photons, and a series of particle reactions from an axion star could produce detectable radiation. And if an axion star slammed into a neutron star, the collision could generate powerful blasts of radio-frequency radiation —potentially explaining the mysterious fast-radio bursts that have perplexed astronomers. Over the last few years, astronomers have detected dozens of powerful cosmic radio signals of unknown origin, prompting a plethora of explanations, including the possibility that the beams were coming from alien civilizations.